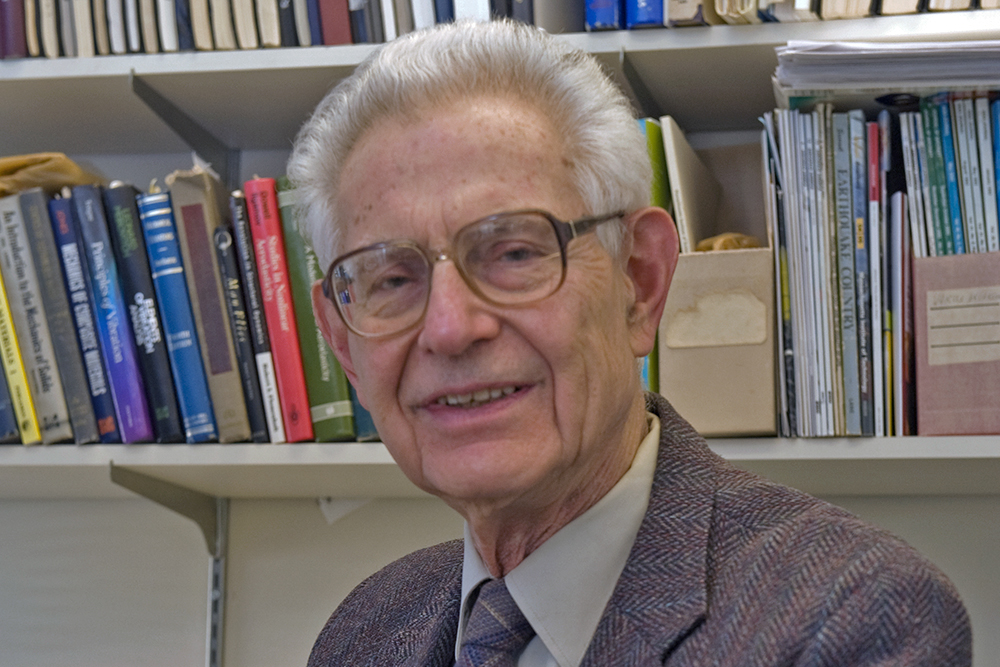 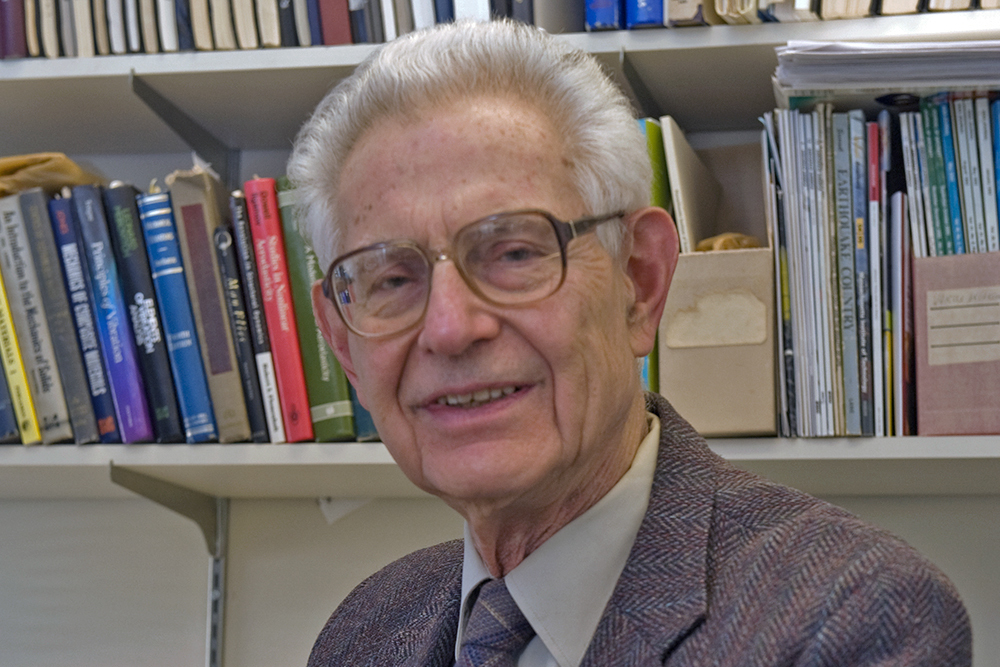 Professor Emeritus John Dugundji died on Dec. 20 due to natural causes at Mount Auburn Hospital in Cambridge, Massachusetts. He was 95.

While Dugundji was renowned for his expertise in aeroelasticity, structural dynamics, and composite materials, those who knew him best also admired his deep knowledge and appreciation of poetry, music, history, and the arts. In true MIT spirit, instead of viewing these intellectual pursuits separately, he instead used each to inform the other — like a poem nestled comfortably on a page alongside research figures in an academic journal or a flute used to demonstrate vibration, connecting music to the basic principles of his work in dynamics.

Taken together with his inherent kindness and his dedication to teaching and mentorship, this interplay between humanity and technicality that permeated every facet of his life is what will be remembered most by Dugundji’s loved ones, colleagues, students, and friends.

“John was a different type of MIT faculty; first and foremost, he was just a nice and caring person, and he approached you being a faculty member different than anyone else I ever encountered,” says Brian Wardle, professor of aeronautics and astronautics at MIT, who was not only a faculty colleague of Dugundji, but also a former student of his courses in structural dynamics. “Whether or not your work was directly related to his, you could always count on him for a meaningful technical discussion, and you would see the way he brightened whenever he talked about dynamics that he just really loved it.”

Born in New York City on Oct. 25, 1925, Dugundji earned his undergraduate degree in aerospace engineering from New York University in 1944. Upon graduation, he served with the United States Navy from 1944 until 1946 as an aviation electronic technician’s mate, earning an American Theatre Medal and Victory Medal during World War II. He completed his master’s degree in aeronautics and astronautics at MIT in 1948. He spent a year working in industry as a research engineer at Grumman Aircraft Company in Bethpage, New York, until he returned to MIT to pursue his doctoral studies in aeronautical and astronautical engineering.

Upon receiving his Doctor of Science in aeronautical engineering in 1951, Dugundji returned to industry, working as a dynamics engineer at Republic Aviation Corporation in Farmingdale, New York, until 1956, when MIT called him back again. He officially joined the faculty in the Department of Aeronautics and Astronautics (AeroAstro) in 1957, where he remained until his retirement in 1993.

In some of his earliest research contributions, Dugundji did fundamental work developing a model to interpret and normalize panel flutter, affecting the stability of both airplane wings and rockets while interacting with supersonic flow. He would go on to pursue a series of research projects using composite structures and structural mechanics to characterize phenomena like vibration and resonance in nonlinear systems by modeling elastic coupling, which had a wide range of applications, from smokestacks swaying in the wind to spinning mechanical components found in computer hard drives.

“His work was very elegant in both a theoretical and experimental way put together,” says Carlos Cesnik, Clarence L. (Kelly) Johnson Professor of Aerospace Engineering at the University of Michigan, who was a former faculty colleague of Dugundji. “And if I were to summarize, he was a giant as a scholar aeroelasticity, nonlinear dynamics, and structural mechanics, and he was also a true gentleman. He has really influenced my life and approach to work.”

In 2006, Dugundji received the Structures, Structural Dynamics, and Materials (SDM) Award from the American Institute of Aeronautics and Astronautics (AIAA), recognizing lifetime achievement with significant contributions to the field. He was cited for “seminal research contributions in aeroelasticity, aeroservoelasticity, nonlinear vibrations and composite structures of fixed-wing aircraft, rotorcraft, turbomachinery as well as his distinguished service as inspirational aerospace educator.”

Indeed, whether he was teaching in a classroom or working with a graduate student on their research thesis, many of his students have shared similar reflections of his infinite patience, energy, and spirit. His academic impact is palpable, evidenced by many of his former students who have become titans in the field in their own right.

Even after his retirement in 1993, Dugundji remained an active member of the AeroAstro community, teaching undergraduate courses in structural dynamics, collaborating on research projects, and mentoring graduate students. But Dugundji’s dedication to mentorship was not only reserved for students. Dugundji was an advocate for early-career faculty and even arranged regular lunches to help new faculty members build support networks and a sense of community.

“From early on, John sought me out, took an active interest in my work, and engaged with students in my lab. Very quickly, he essentially became a member of my lab group,” says Raúl Radovitzky, professor of aeronautics and astronautics, who joined MIT in 2001. “John was a caring and loving person with such a profound humanity inside him. He was loved and admired by everyone around him, and a very important figure in my career.”

For his family, their father’s favorite poem, “Ithaca” by Constantine P. Cavafy, will always have a special meaning, citing the following excerpt Dugundji quoted in his keynote lecture he delivered following his SDM award from the AIAA: “When you start on your journey to Ithaca, then pray that the road is long, full of adventure, full of knowledge. // Ithaca has given you the beautiful voyage. / Without her you would never have taken the road. / But she has nothing more to give you. // And if you find her poor, Ithaca has not defrauded you. // With the great wisdom you have gained, with so much experience, / you must surely have understood by then what Ithacas mean.”

A memorial service celebrating John Dugundji’s life will be hosted in the MIT Chapel at a later date in 2021 (to be determined). At the Dugundji family’s request, gifts may be made in his memory to the AeroAstro Graduate Fellowship Fund. Alternatively, checks may be made payable to MIT in memory of John Dugundji to the AeroAstro Graduate Fellowship Fund (account #3290600) and mailed to: Memorial Gifts Office, 600 Memorial Drive, W98-500, Cambridge, MA 02139.

How to fend off ‘educational numbness’ with experiential learning