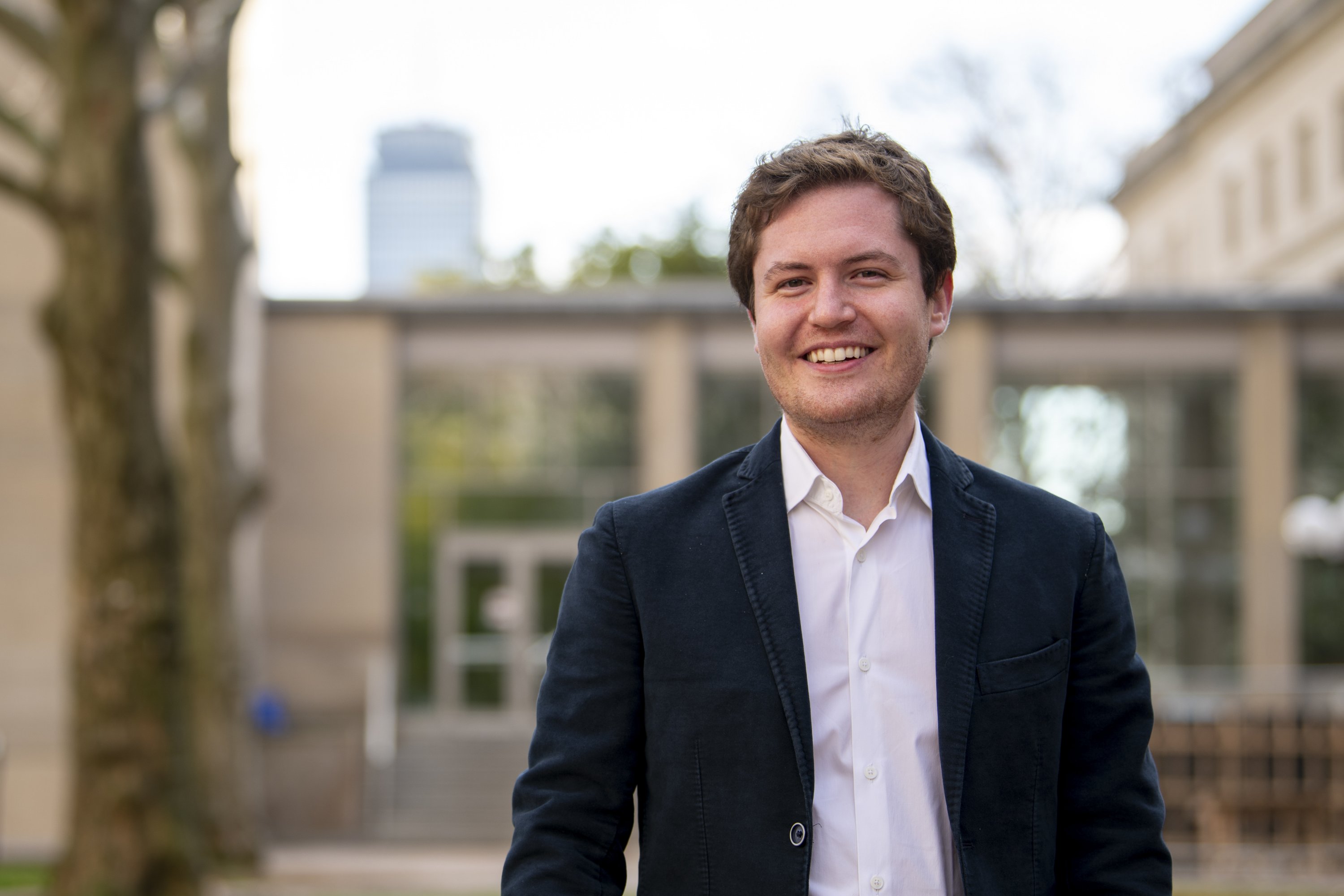 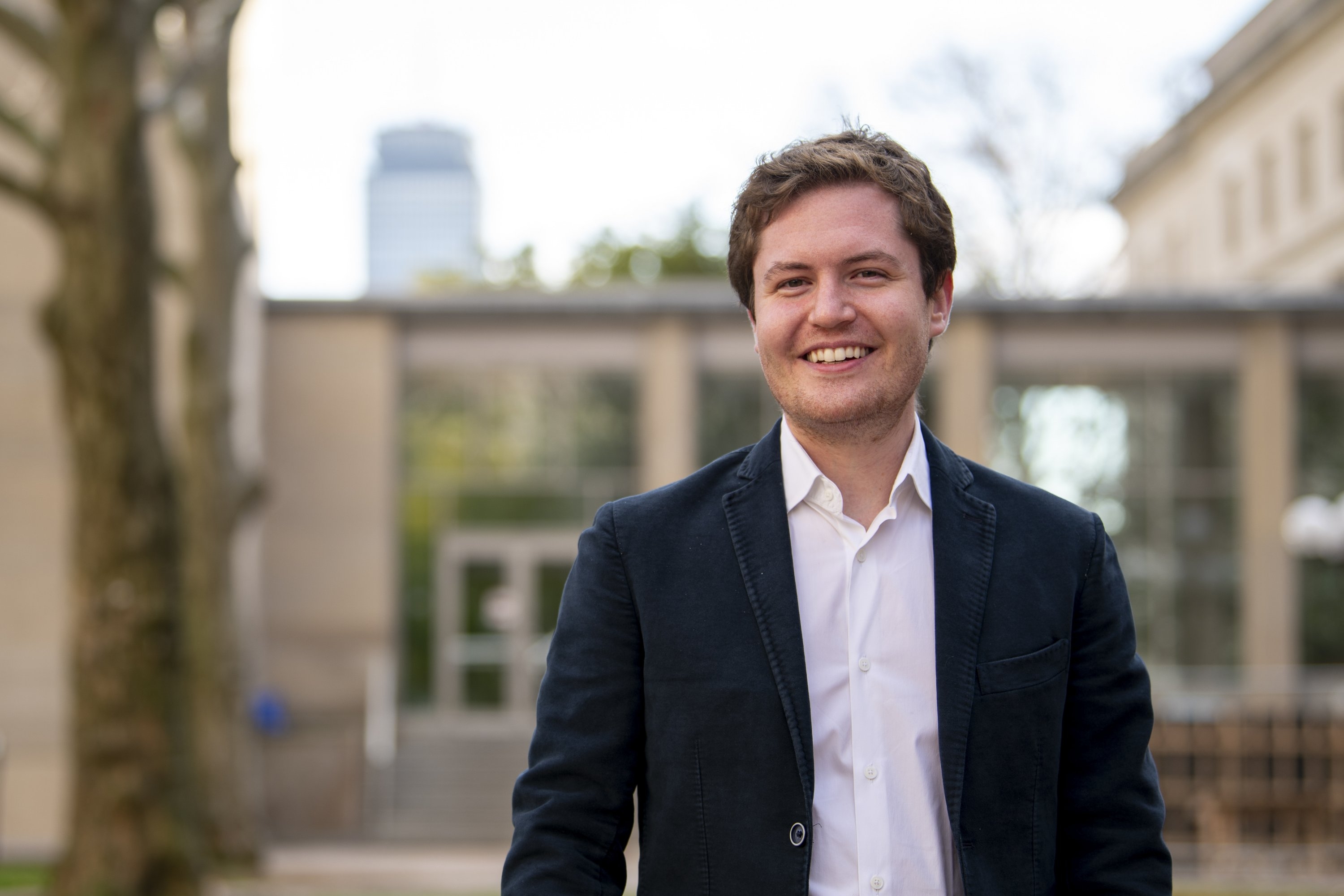 On the path to writing his PhD dissertation, Lucio Milanese made a discovery — one that refocused his research, and will now likely dominate his thesis.

Milanese studies plasma, a gas-like flow of ions and electrons that comprises 99 percent of the visible universe, including the Earth’s ionosphere, interstellar space, the solar wind, and the environment of stars. Plasmas, like other fluids, are often found in a turbulent state characterized by chaotic, unpredictable motion, providing multiple challenges to researchers who seek to understand the cosmic universe or hope to harness burning plasmas for fusion energy.

Milanese is interested in what physicist Richard Feynman called “the most important unsolved problem of classical physics” — turbulence. In this case, the focus is plasma turbulence, its nature and structure.

“Say you stir a cup of tea with a spoon: You are creating a vortex, a whirlpool, at the scale of the cup. This large-scale vortex eventually gets broken up into smaller vortices, which shear into yet smaller and smaller structures. Eventually this cascade will generate small enough structures that they will dissipate and the energy will turn into heat.”

In a paper recently published in Physics Review Letters, Milanese offers a newly discovered mechanism called “dynamic phase alignment” to uncover how turbulence transfers energy from large scales to smaller scales. Milanese, a nuclear science and engineering PhD candidate at the Plasma Science and Fusion Center, calls the discovery a “building block of a general theory of turbulence.”

“Turbulence is complex and chaotic, but it is not completely lawless: the overall dynamics must obey some constraints,” says Milanese. “One universal mechanical constraint is that energy must be conserved. In the systems we study, there also exists a topological constraint: the total amount of helicity — the degree to which vortices twist and spiral — is conserved.”

Milanese explains that both of these conservation statements apply at all physical scales except the smallest ones, where dissipation can no longer be ignored.

“For the types of systems that are modeled by the equations that we consider — and there are many —  if we were to develop a model of turbulence that considers only the conservation of energy, we would inevitably end up violating the constraint on helicity conservation. We were able to resolve this apparent contradiction by uncovering the new mechanism of dynamic phase alignment.”

Milanese is thus offering an explanation for a generally observed phenomenon he calls “the joint cascade of energy and helicity.” This kind of cascading pattern is observed in the plasma systems Milanese has been studying, like the ionosphere, the solar wind, and the solar corona.

Milanese observes that just as a spoon brings energy and helicity to a cup of tea, the movement of plasma on the surface of the sun “injects” these quantities into the solar wind and the sun’s corona. Once that happens and the cascade begins, the energy and helicity are conserved until the turbulent vortices dissipate.

In the plasma systems Milanese explored, the amount of helicity (twistedness) is determined by how closely correlated the fluctuations of magnetic and electric fields are. At large scales, when a significant amount of helicity is present in the system, it is statistically likely that if the electric potential — the voltage — is large, the local magnetic potential fluctuation will be large as well. As large-scale structures break into smaller-scale structures, this changes progressively, and it becomes more and more likely that if the electric potential is locally large, the magnetic potential fluctuation will be small, close to zero (and vice versa).

“We found that as large-scale structures break into smaller scale structures, the magnetic and electric potential fluctuations become progressively more correlated. This is a remarkable example of how turbulent plasmas can self-organize to respect mechanical and topological constraints.”

Discovery of this dynamic phase alignment provides a new lens through which to view other turbulent systems. Milanese and his colleagues found that the model equations they adopted to describe plasmas are mathematically identical to those describing the dynamics of rapidly rotating, non-ionized fluid flows, such as hurricanes and tornadoes.

The discovery of this new paradigm is built on a theoretical framework developed by his advisor, Professor Nuno Loureiro, and Loureiro’s collaborator Professor Stanislav Boldyrev of the University of Wisconsin at Madison, to describe the dynamics of plasmas made of electrons and positrons — the antiparticles of electrons. Milanese started working with Maximilian Daschner, an exchange student from ETH Zurich, to probe the validity of this theoretical framework via numerical simulations.

“It was a nice numerical project for a UROP” says Milanese. “We thought we would be done in six months and publish a paper. But then, two years later, we were still looking at interesting results.”

Christopher Chen, Ernest Rutherford Fellow at the School of Physics and Astronomy, Queen Mary University of London, and an expert in observations of turbulence in the solar wind, comments on the significance of the discovery.

“Understanding plasma turbulence is a key part of solving some of the longstanding questions in plasma astrophysics, such as how the solar corona is heated, how the solar wind is generated, how strong magnetic fields in the universe are created, and how energetic particles are accelerated. The results of this paper are important, since they provide a new understanding of the key universal processes operating in such plasmas. The paper is also significant and timely since it makes predictions that we can test with the Parker Solar Probe and Solar Orbiter spacecraft, which are currently on their way to study the sun close up.”

Closer to home, the work is relevant to upcoming experiments at the Institute for Plasma Physics in Germany. These experiments will trap significant numbers of electrons and positrons in a magnetic cage, allowing researchers to study the properties of such a system, although at temperatures much lower than what is usually observed in astrophysical settings. Milanese expects the system to be turbulent and believes that it could be potentially used as a laboratory test bed for his ideas.

Milanese observes that further study of dynamic phase alignment has become the bulk of his dissertation. He is currently working to extend the applicability of this work to include a much broader range of fluids than the types of plasma and rapidly rotating fluids he has already explored.

He will soon be broadening his perspective as well. Next year he will find himself at Tsinghua University in China as part of the Schwarzman Scholar’s class of 2022. This one-year, fully funded master’s program in foreign affairs will offer him opportunities in public policy, economics, business, and international relations. Milanese is looking forward to exploring the business and policy side of creating a global fusion energy industry — one dependent on building an advanced understanding of turbulence in plasmas, which has been his primary focus.

The research is funded, in part, by the U.S. Department of Energy, the National Science Foundation, and Loureiro’s Professor Amar G. Bose Research Grant. Milanese was a recipient of the Manson Benedict Fellowship of the MIT Department of Nuclear Science and Engineering.