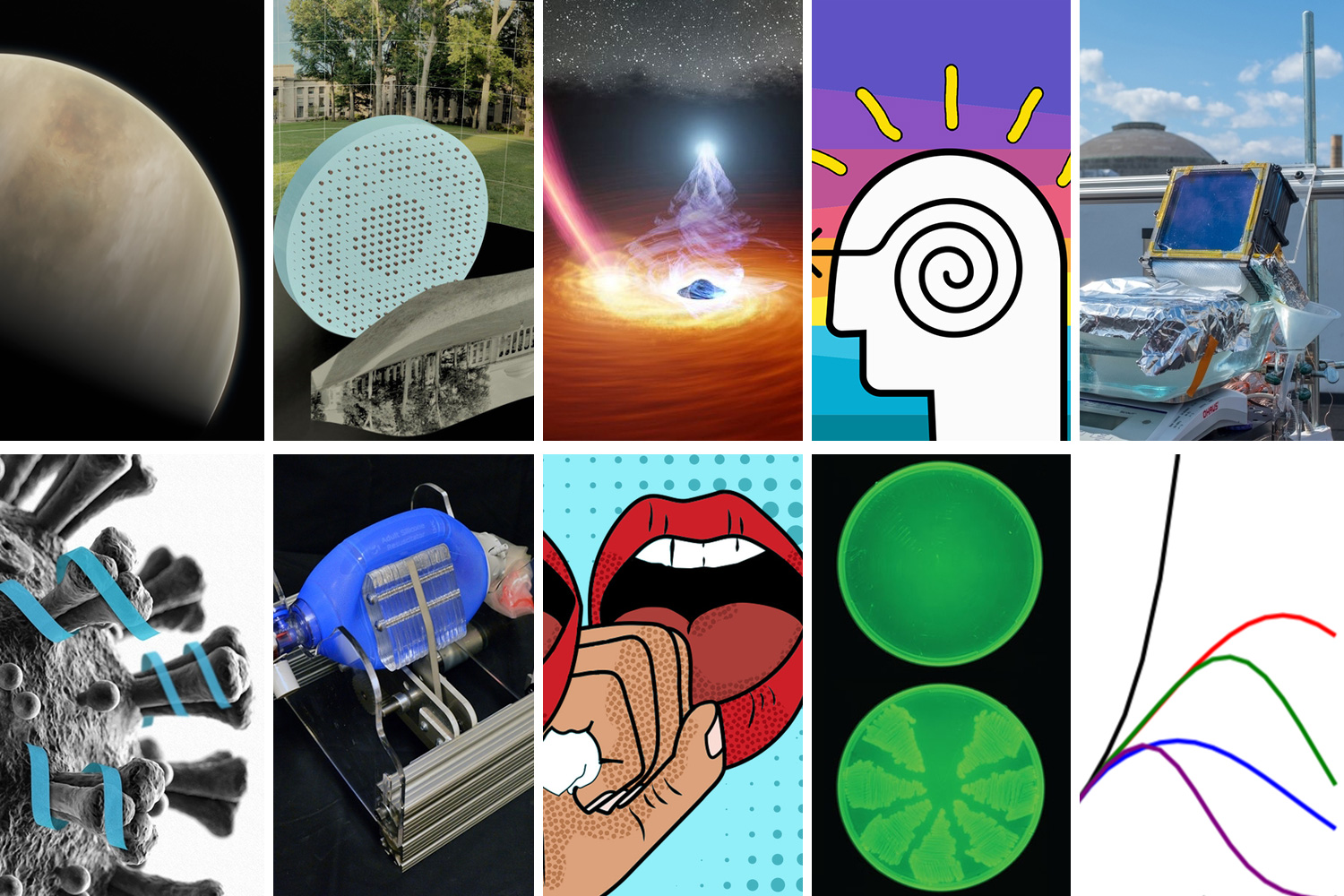 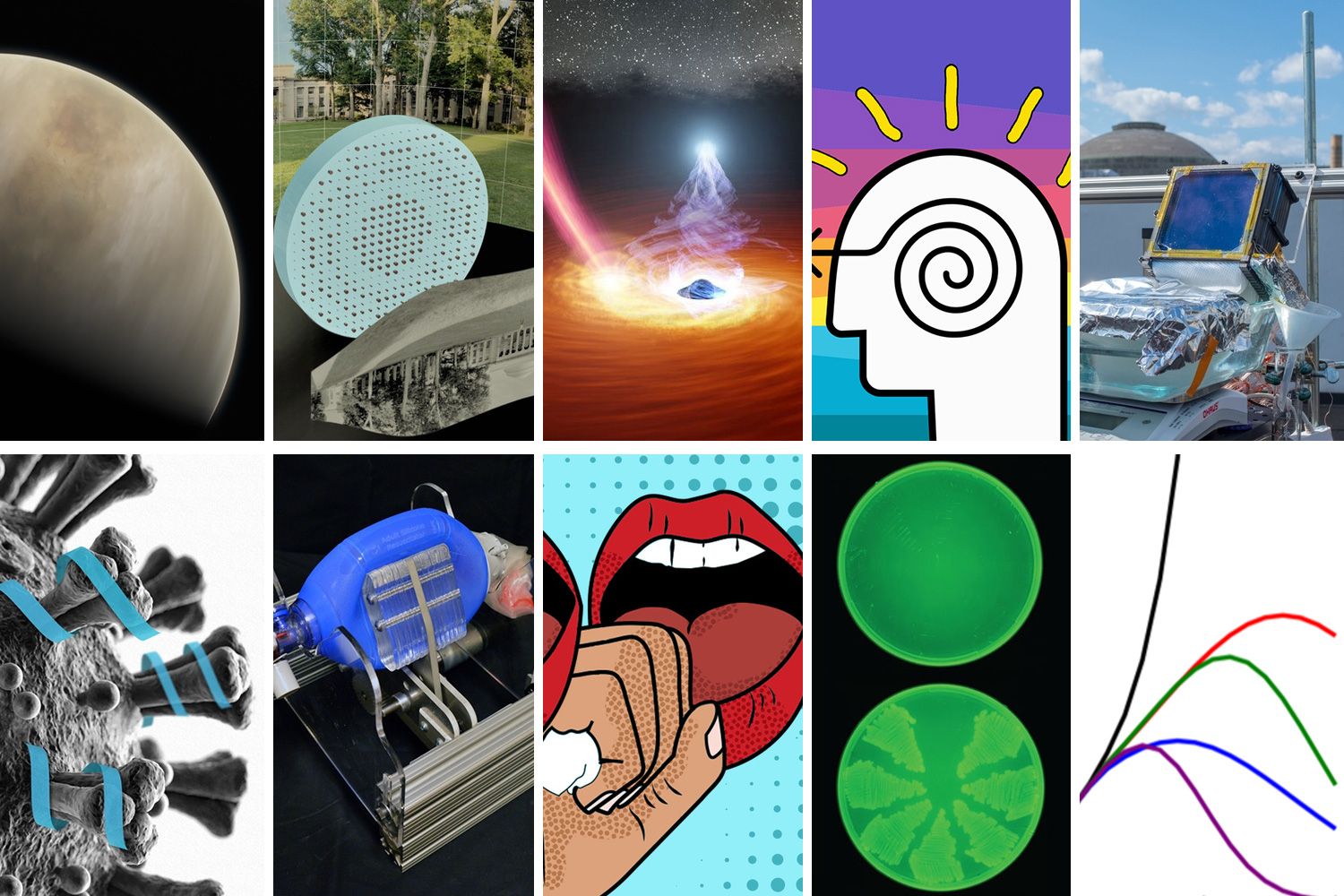 Although 2020 has been a year most of us would prefer to forget, it still featured a number of research breakthroughs worth celebrating. Despite the new challenges brought on by Covid-19 — and sometimes because of them — MIT’s community achieved important milestones on the frontiers of science and engineering.

10. How quarantines impact Covid-19’s spread. A team of MIT engineers developed a model that uses data from the Covid-19 pandemic in conjunction with a neural network to determine the efficacy of quarantine measures and better predict the spread of the virus. The researchers say their model is the first to have integrated machine learning with epidemiology.

9. A flat fisheye lens. Engineers at MIT and elsewhere designed the first flat lens that can produce crisp, 180-degree panoramic images similar to those produced by the curved glass of traditional fisheye lenses. The design consists of a single flat, millimeter-thin piece of glass covered on one side with tiny structures that precisely scatter incoming light to produce panoramic images.

6. A black hole’s corona plays peekaboo. In a first, astronomers at MIT and elsewhere watched a supermassive black hole’s corona — the ring of high-energy particles that encircles a black hole’s horizon — disappear and then reappear. Although the cause of the transformation is unclear, the researchers guess it may have been caused by a star caught in the black hole’s gravitational pull.

5. Simple, solar-powered water desalination. Researchers at MIT and in China developed a completely passive, solar-powered water desalination system that achieves a new level of efficiency in turning seawater into fresh, potable water using the energy of sunlight. The system could provide more than 1.5 gallons of fresh drinking water per hour for every square meter of solar collecting area.

4. Model identifies a powerful new antibiotic. An MIT-developed deep learning model identified a new drug compound capable of killing many species of antibiotic-resistant bacteria. In lab tests, the compound killed many of the world’s most problematic disease-causing bacteria, including some strains that are resistant to all known antibiotics.

3. Deploying an open-source, low-cost ventilator. A team including MIT engineers, physicians, and computer scientists designed an inexpensive, open-source ventilator to address a global shortage of the life-saving machines brought by the Covid-19 pandemic. The team’s ventilator can be produced using common materials to enable rapid deployment. The team also published details on their website to facilitate parallel efforts by other experts.

2. A signature of life on Venus. Astronomers from MIT and elsewhere found evidence of phosphine, a gas associated with living organisms, in the habitable region of Venus’ atmosphere. If their observation is indeed associated with life, it must be some sort of “aerial” life-form in Venus’ clouds, the team concluded.

1. Covid-19 detection through cough recordings. MIT researchers trained an artificial intelligence model to distinguish asymptomatic people infected with Covid-19 from healthy individuals through forced-cough recordings. In experiments, the model accurately identified 98.5 percent of participants who were confirmed to have Covid-19, based on the recordings they submitted.

In case you missed it…

Additional top research stories of 2020 include a study of economic recovery after the 1918 flu pandemic; a look at the “blue shift” and vote-counting in presidential elections; a progress report on the new MIT-designed fusion experiment; a prototype for a reusable silicone rubber face mask; and an answer to why shaving dulls even the sharpest of razors.