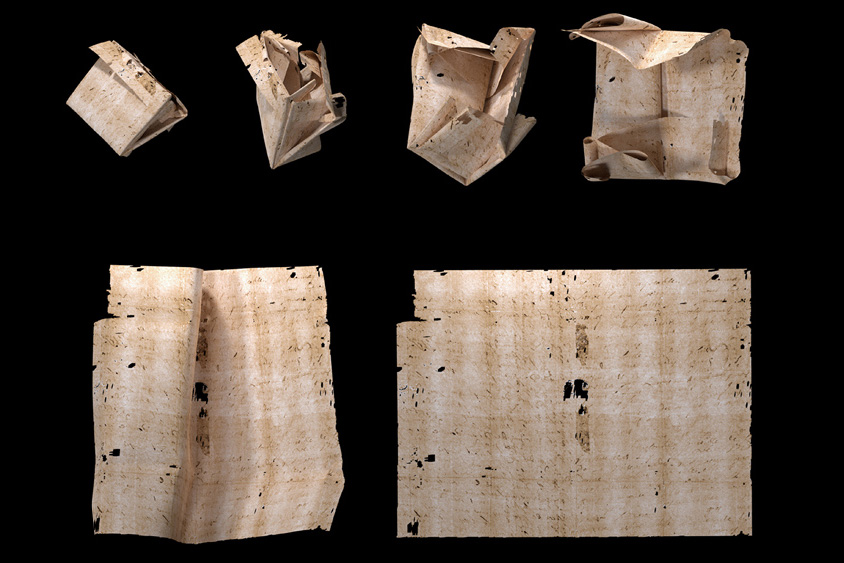 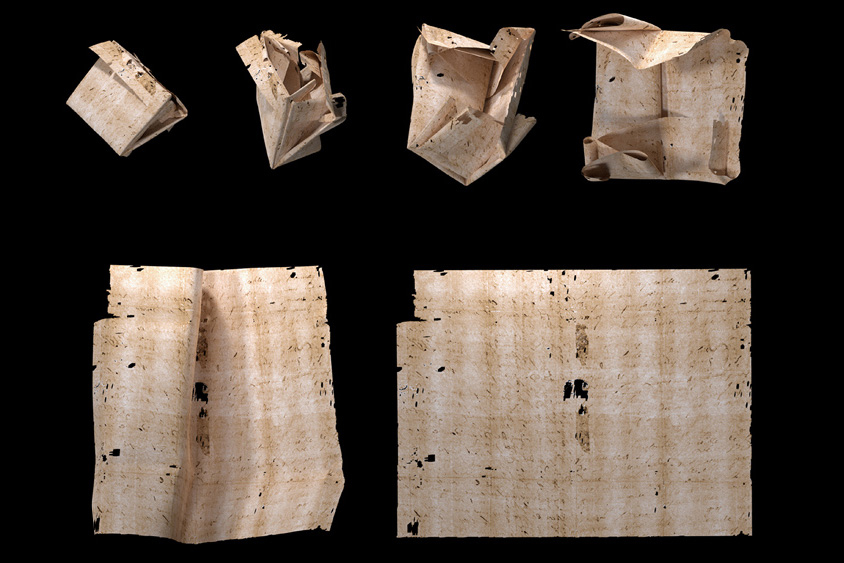 An international team of scholars has read an unopened letter from early modern Europe — without breaking its seal or damaging it in any way — using an automated computational flattening algorithm. The team, including MIT Libraries and Computer Science and Artificial Intelligence Laboratory (CSAIL) researchers and an MIT student and alumna, published their findings today in a Nature Communications article titled, “Unlocking history through automated virtual unfolding of sealed documents imaged by X-ray microtomography.”

The senders of these letters had closed them using “letterlocking,” the historical process of folding and securing a flat sheet of paper to become its own envelope. Jana Dambrogio, the Thomas F. Peterson Conservator at MIT Libraries, developed letterlocking as a field of study with Daniel Starza Smith, a lecturer in early modern English literature at King’s College London, and the Unlocking History research team. Since the papers’ folds, tucks, and slits are themselves valuable evidence for historians and conservators, being able to examine the letters’ contents without irrevocably damaging them is a major advancement in the study of historic documents.

“Letterlocking was an everyday activity for centuries, across cultures, borders, and social classes,” explains Dambrogio. “It plays an integral role in the history of secrecy systems as the missing link between physical communications security techniques from the ancient world and modern digital cryptography. This research takes us right into the heart of a locked letter.”

This breakthrough technique was the result of an international and interdisciplinary collaboration between conservators, historians, engineers, imaging experts, and other scholars. “The power of collaboration is that we can combine our different interests and tools to solve bigger problems,” says Martin Demaine, artist-in-residence in MIT’s Department of Electrical Engineering and Computer Science (EECS) and a member of the research team.

The algorithm that makes the virtual unfolding possible was developed by Amanda Ghassaei SM ’17, a graduate of the Center for Bits and Atoms, and Holly Jackson, an undergraduate student in electrical engineering and computer science and a participant in MIT’s Undergraduate Research Opportunity Program (UROP). The virtual unfolding code is openly available on GitHub.

“When we got back the first scans of the letter packets, we were instantly hooked,” says Ghassaei. “Sealed letters are very intriguing objects, and these examples are particularly interesting because of the special attention paid to securing them shut.”

“Who would have thought that a scanner designed to look at teeth would take us so far?” says Davis.

Computational flattening algorithms were then applied to the scans of the letters. This has been done successfully before with scrolls, books, and documents with one or two folds. The intricate folding configurations of the “locked” letters, however, posed unique technical challenges.

“The algorithm ends up doing an impressive job at separating the layers of paper, despite their extreme thinness and tiny gaps between them, sometimes less than the resolution of the scan,” says Erik Demaine, professor of computer science at MIT and an expert in computational origami. “We weren’t sure it would be possible.”

The team’s approach utilizes a fully 3D geometric analysis that requires no prior information about the number or types of folds or letters in a letter packet. The virtual unfolding generates 2D and 3D reconstructions of the letters in both folded and flat states, plus images of the letters’ writing surfaces and crease patterns.

“One of coolest technical contributions of the work is a technique that explores the folded and flattened representations of a letter simultaneously,” says Holly Jackson. “Our new technology enables conservators to preserve a letter’s internal engineering, while still giving historians insight into the lives of the senders and recipients.”

This virtual unfolding technique was used to reveal the contents of a letter dated July 31, 1697. It contains a request from Jacques Sennacques to his cousin Pierre Le Pers, a French merchant in The Hague, for a certified copy of a death notice of one Daniel Le Pers. The letter comes from the Brienne Collection, a European postmaster’s trunk preserving 300-year-old undelivered mail, which has provided a rare opportunity for researchers to study sealed locked letters.

“The trunk is a unique time capsule,” says David van der Linden, assistant professor in early modern history, Radboud University Nijmegen. “It preserves precious insights into the lives of thousands of people from all levels of society, including itinerant musicians, diplomats, and religious refugees. As historians, we regularly explore the lives of people who lived in the past, but to read an intimate story that has never seen the light of day — and never even reached its recipient — is truly extraordinary.”

In the Nature Communications article, the team also unveils the first systematization of letterlocking techniques. After studying 250,000 historical letters, they devised a chart of categories and formats that assigns letter examples a security score. Understanding these security techniques of historical correspondence means archival collections can be conserved in ways that protect small but important material details, such as slits, locks, and creases.

“Sometimes the past resists scrutiny,” explains Daniel Starza Smith. “We could simply have cut these letters open, but instead we took the time to study them for their hidden, secret, and inaccessible qualities. We’ve learned that letters can be a lot more revealing when they are left unopened.”

The research team hopes to make a study collection of letterlocking examples available to scholars and students from a range of disciplines. The virtual unfolding algorithm could also have broad applications: Because it can handle flat, curved, and sharply folded materials, it can be used on many types of historical texts, including letters, scrolls, and books.

“What we have achieved is more than simply opening the unopenable, and reading the unreadable,” says Nadine Akkerman, reader in early modern English literature at Leiden University. “We have shown how truly interdisciplinary work breaks down boundaries to investigate what neither humanities nor the sciences can hope to understand alone.”

Computational tools promise to accelerate research on letterlocking as well as reveal new historical evidence. Thanks to this research, adds Rebekah Ahrendt, associate professor of musicology at Utrecht University, “we can now imagine new affective histories that physically connect the past and the present, the human and the nonhuman, the tangible and the digital.”

This research was supported in part by grants from the Seaver Foundation, the Delmas Foundation, the British Academy, and the Nederlandse Organisatie voor Wetenschappelijk Onderzoek.