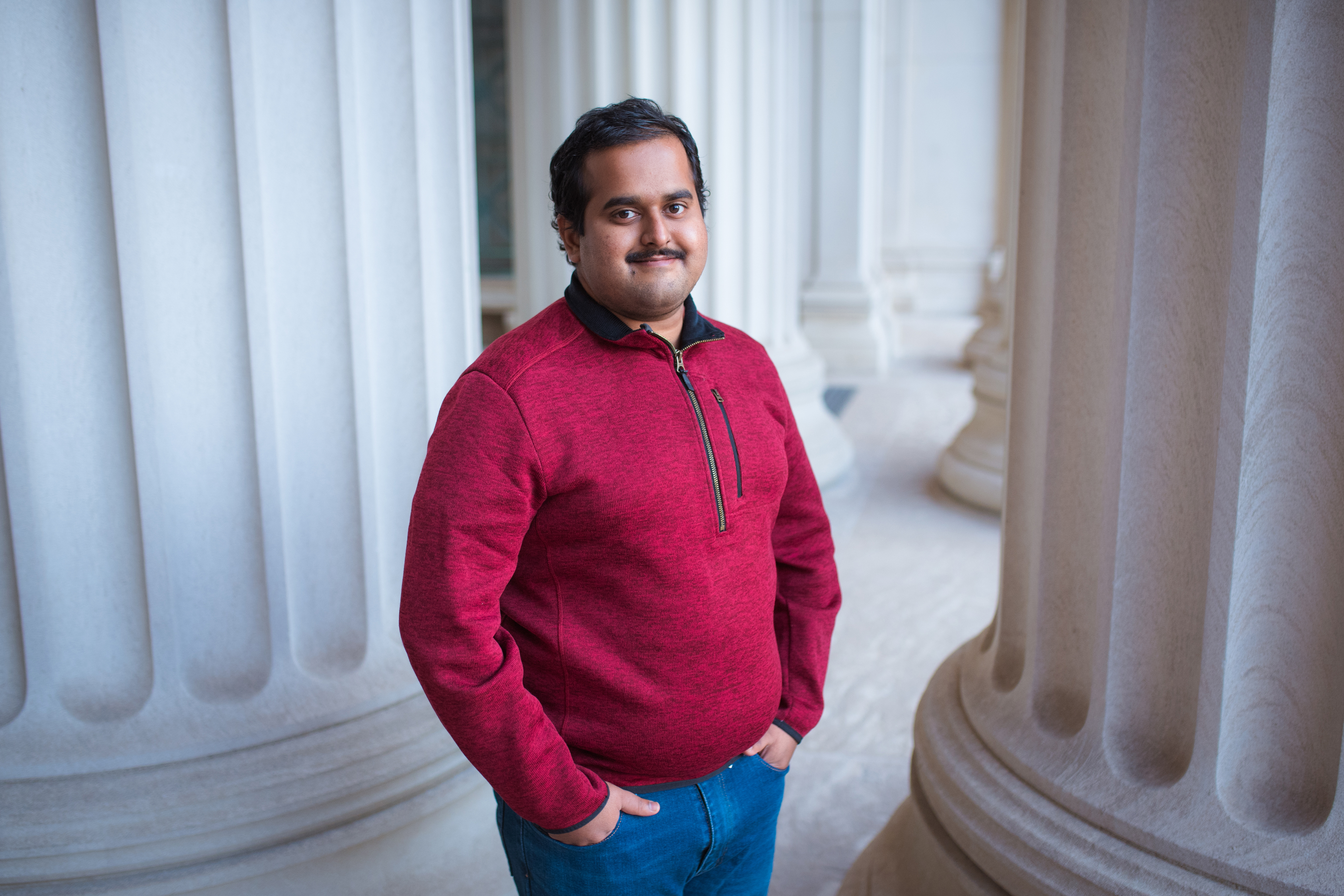 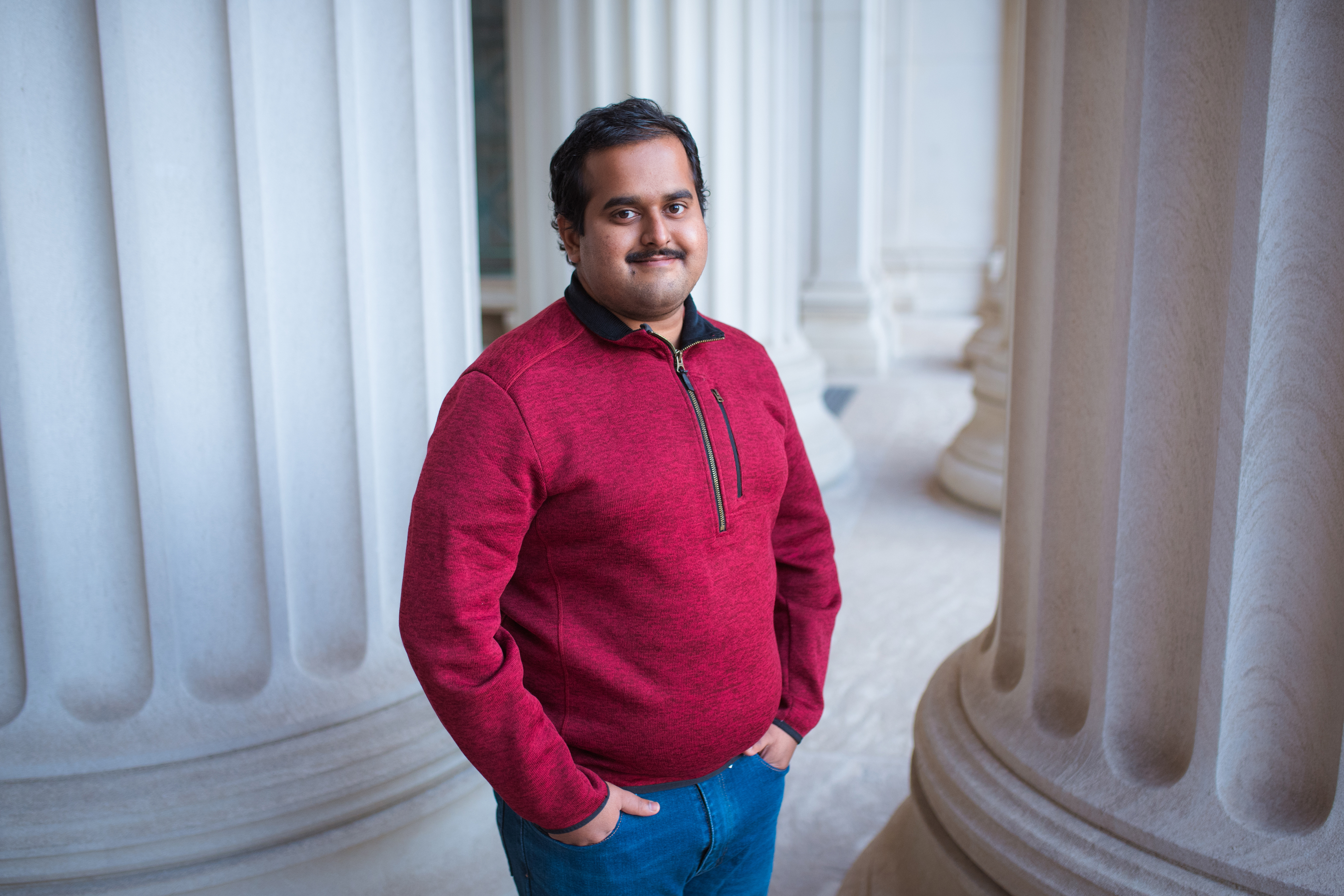 One of India’s largest commercial and research nuclear reactor facilities lies just south of Arunkumar Seshadri’s hometown of Chennai, India. It was there, during a high school field trip, that the seeds of his interest in nuclear power were planted.

“We learned the basic outline of how a reactor functions,” recalls Seshadri, a fifth-year doctoral student in nuclear science and engineering. “I was fascinated by how such a little bit of uranium or other fuel could produce such an enormous amount of energy.”

This fascination quickly found a formal outlet during Seshadri’s undergraduate years, and continues to propel him now at MIT.

Working closely with his advisor Koroush Shirvan, John Clark Hardwick (1986) Career Development Professor, Seshadri has forged a singular path identifying and testing a new generation of radiation-, corrosion-, and heat-resistant materials and fuels that can better withstand the extreme conditions in nuclear reactors.

His investigations have yielded advances in both basic science and practical technologies, as evidenced by a flurry of journal publications and patents. “I really enjoy answering engineering problems faced by the nuclear industry, and moving toward a more fundamental understanding of the structural and chemical changes” that affect materials in reactors, says Seshadri.

The son of a Sanskrit language teacher and a stay-at-home mother, Seshadri was dismantling and reassembling his home’s appliances and acquiring programming skills during his elementary years, and competing in science tournaments in high school. At SASTRA University, where he majored in mechanical engineering and controls systems, Seshadri was recruited to a research project funded by the nuclear industry. It proved a decisive experience.

“The goal was to develop sensors for two-phase flow — water and steam — as happens in a boiling water reactor,” he says. “We wanted to extract information about these two different phases so we could learn exactly what was happening inside.” The challenge of designing technology for monitoring and better predicting how heat moves inside a reactor, and the associated prospect of improving operations in commercial nuclear facilities, proved irresistible.

Inspired by the Indian government’s call for a skilled workforce to help expand its nuclear industry, Seshadri decided to tackle an advanced degree in nuclear science and engineering. “MIT had a rich tradition of experts in two-phase heat transfer; they are torchbearers in the field,” he says. “I thought this could be a place to enrich my interests.”

He found immediate direction for his research pursuits with Shirvan, who was running a series of experiments for the Department of Energy to formulate nuclear reactor fuels with greater accident tolerance. For his master’s thesis, Seshadri examined how different kinds of coating on the metal cladding of nuclear fuels behaved as they were heated up and cooled down. He was particularly interested in wettability, the property that determines whether a material attracts or repels fluids such as the coolants in nuclear reactors.When materials demonstrate higher wettability, coolants can more efficiently carry away heat. But with lower wettability, materials repel fluid, causing steam vapor to form on surfaces, trapping heat and leading to potentially perilous temperature increases within the reactor.

“It was the first time anyone showed that gamma radiation created such an impact, and this enabled us to test different coated claddings to improve their heat transfer behaviors,” he says. Seshadri carried out high-resolution microscopic measurements that revealed precisely how gamma radiation affected these coatings.

“I was thrilled,” he says. “To industry, radiation was an evil, damaging surfaces, but we saw that it helped heat transfer.” Some of these enhanced fuel claddings have moved on to industry evaluations. In a twist to their research, Seshadri and Shirvan have patented a technique based on gamma irradiation to make water-repellent coatings, which could be used on windshields or in desalination plants.

Passion for research and teaching

For his doctoral research, Seshadri has shifted to a related area: investigating a silicon carbide composite of great interest to industry as a replacement for a zirconium alloy fuel cladding that is highly susceptible to corrosion. “Silicon carbide composite can withstand very high temperatures and is strong without being brittle,” he says, “but the challenge is that in extreme hydrothermal environments and in the presence of radiation, small quantities of silica dissolve into the coolant, potentially damaging components.”

Seshadri’s job is to determine how different types of reactor radiation contribute to the loss of silicon, and whether that circulating silica is within industry limits. “If silica deposits in reactor components, industry will need to develop a process for removing it,” he says. Seshadri is developing models for predicting the rate of silica dissolution.  His experiments are vital in the search for fuel cladding that can better tolerate temperature fluctuations in the world’s operating light-water reactors. His work will also help in the development of advanced reactors that operate at much higher temperatures, and that use silicon carbide components and molten salt as a coolant.

Seshadri credits Shirvan as integral to his accomplishments and his growth as a researcher. “I came to MIT with no background in nuclear science, and wasn’t doing well,” he recalls. “Shirvan spent countless hours teaching me the essentials I needed, and then giving me the freedom to pursue problems and the time to get results, without pressure.”

This mode of mentorship powers Seshadri’s own teaching. In his free time, Seshadri supervises undergraduates in India working on energy projects, encouraging them to pursue ambitious goals. On a remote basis, he instructs them in computational modeling, helps them write up research for publication, and apply to graduate schools. “My passions, and all my hobbies, are related to research, and interacting with these students is a step toward the career I want in academia: leading a research team at a university, and getting solutions to deep problems.”