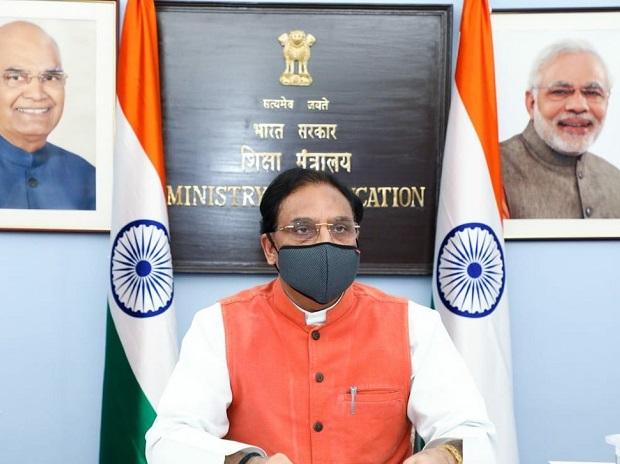 There is a broad consensus among states about conducting Class 12 board exams and an informed, collaborative decision will be taken by June 1, Union Education Minister Ramesh Pokhriyal Nishank’ said on Sunday.


However, states like Maharashtra said at a high-level meeting on Sunday that non-examination route for Class 12 students should be actively examined and Delhi and Kerala governments suggested vaccinating students before the exams.


According to sources, the CBSE has proposed conducting exams between July 15 and August 26 and the result to be declared in September. The board also proposed two options: conducting regular exams for 19 major subjects at notified centres or conducting shorter duration exams at respective schools where students are enrolled.


The ministry has sought detailed suggestions from states by May 25. Sources claimed majority states were in favour of the second option while some wanted a mix of both options.


The CBSE has already cancelled Class 10 board exams and announced an alternative marking policy. The April and May edition of the engineering entrance exam JEE-Mains were also postponed.


The board exams, which are usually conducted in February-March every year, were scheduled to be held from May 4.


After the deliberations on Sunday, the Union Education Minister said, “The meeting was extremely fruitful as we received immensely valuable suggestions. I have requested the state governments to send me their detailed suggestions by May 25. I am confident we will be able to arrive at an informed, collaborative decision regarding the exams and remove the uncertainty among student’s and parent’s minds by informing them of our final decision at the earliest.”

“I want to reiterate that both students’ and teachers’ safety, security, and future are supremely important to us. While a broad consensus was there among the states and UTs about conducting the exams, they have been asked to examine the matter further and send their feedback,” he added.


The minister said the decision will be taken by June 1.


Defence Minister Rajnath Singh chaired the crucial meeting which was convened to decide on the Class 12 board exams and subsequent entrance examinations that were postponed due to the second wave of COVID-19.


According to sources, the first option proposed was conducting exams at designated centres for 19 major subjects.


For minor subjects assessment can be based on performance in major subjects. This can be done if three months of time period is clearly and safely available to the board. August could be a likely month for holding the exams and the whole process is likely to go on till September end, a source said.


Elaborating on the second option, the source said, The exams can be conducted twice by the board depending upon the conducive situation. If a student is not able to appear due to any COVID related matter, he or she will be provided another opportunity to sit for exams.”

The exams will be of 90 minutes duration instead of three hours and will be conducted in same schools where students are enrolled. The questions will be objective and very short answer type. Students will have to appear in one language and three elective subjects, the source added.


The tentative timeline for this option is the first phase of exams from July 15 to August 1 and the second phase from August 8-26.


Exams are proposed to be conducted on Sundays also, the source said.


A large section of students and parents have been demanding cancellation of board exams. The hashtag cancelboardexams also trended on Twitter as the meeting was underway.


Delhi Deputy Chief Minister Manish Sisodia said his government is not in favour of the options being explored by CBSE to conduct the exams and going ahead with the process without vaccinating students will prove to be a big mistake.


Maharashtra Education Minister Varsha Gaikwad said the option for non-examination route for class 12 students should be actively examined keeping in mind the projection that children are more vulnerable to new strains of coronavirus.


The Tamil Nadu government proposed conducting the exams after COVID-19 situation subsides in the state.


“Like other states, Tamil Nadu also wanted to conduct the Class 12 board exams as it plays an important role in deciding students career,” school education minister Anbil Mahesh Poyyamozhi told reporters after meeting.


Odisha Education Minister Samir Ranjan Dash said the exams can either be conducted after the situation improves or can be cut short.


State is also busy in preparation for ensuing cyclones, we will take a decision soon, he said.


Punjab Education Minister Vijay Inder Singla said that during the difficult times, safety and security of students and teachers must be the priority of the government and every possible step should be taken in this regard. The minister suggested conducting exams of only three elective subjects.

CBSE may restore board formats for Class 10th, 12th to pre-pandemic levels