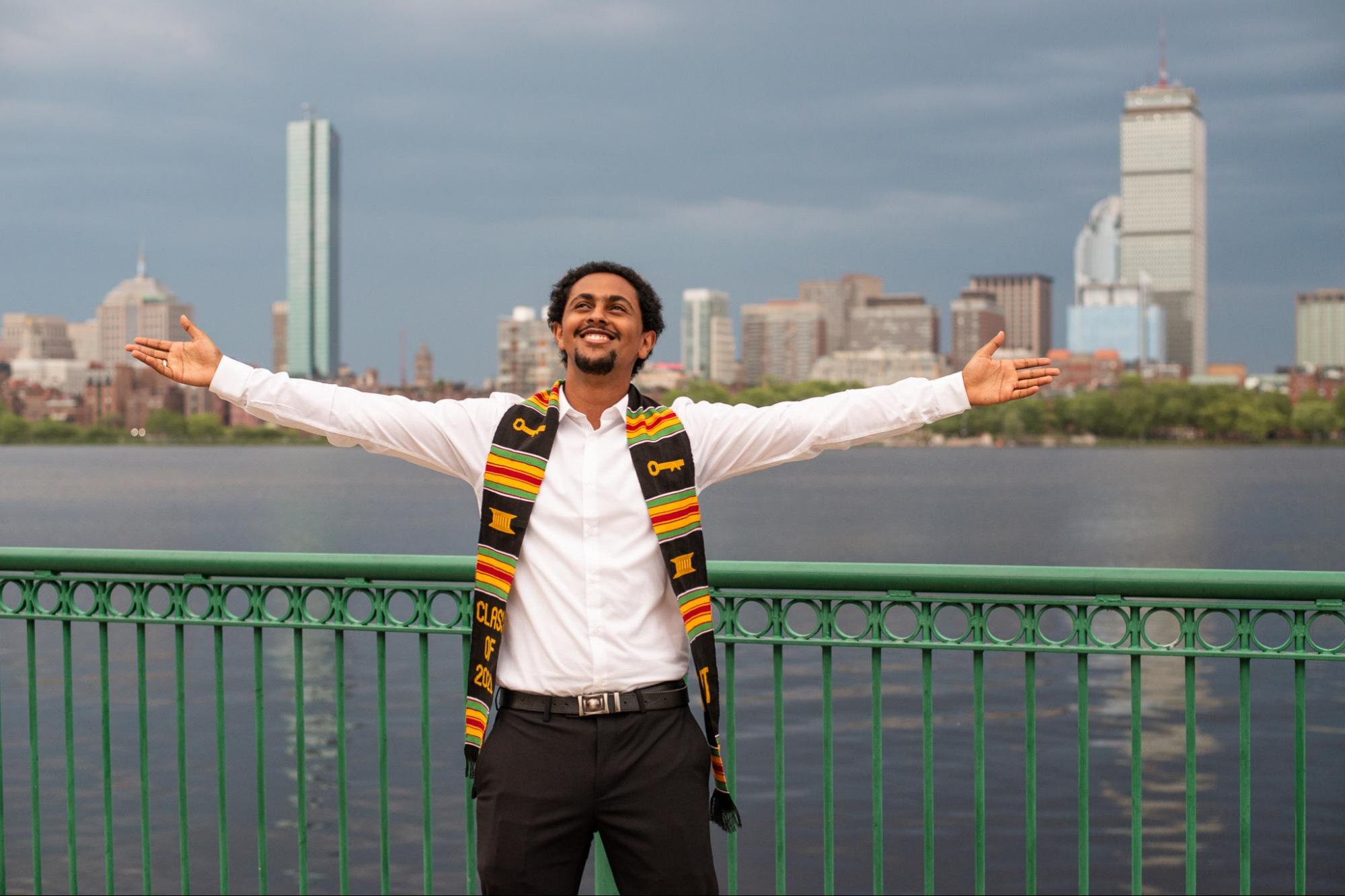 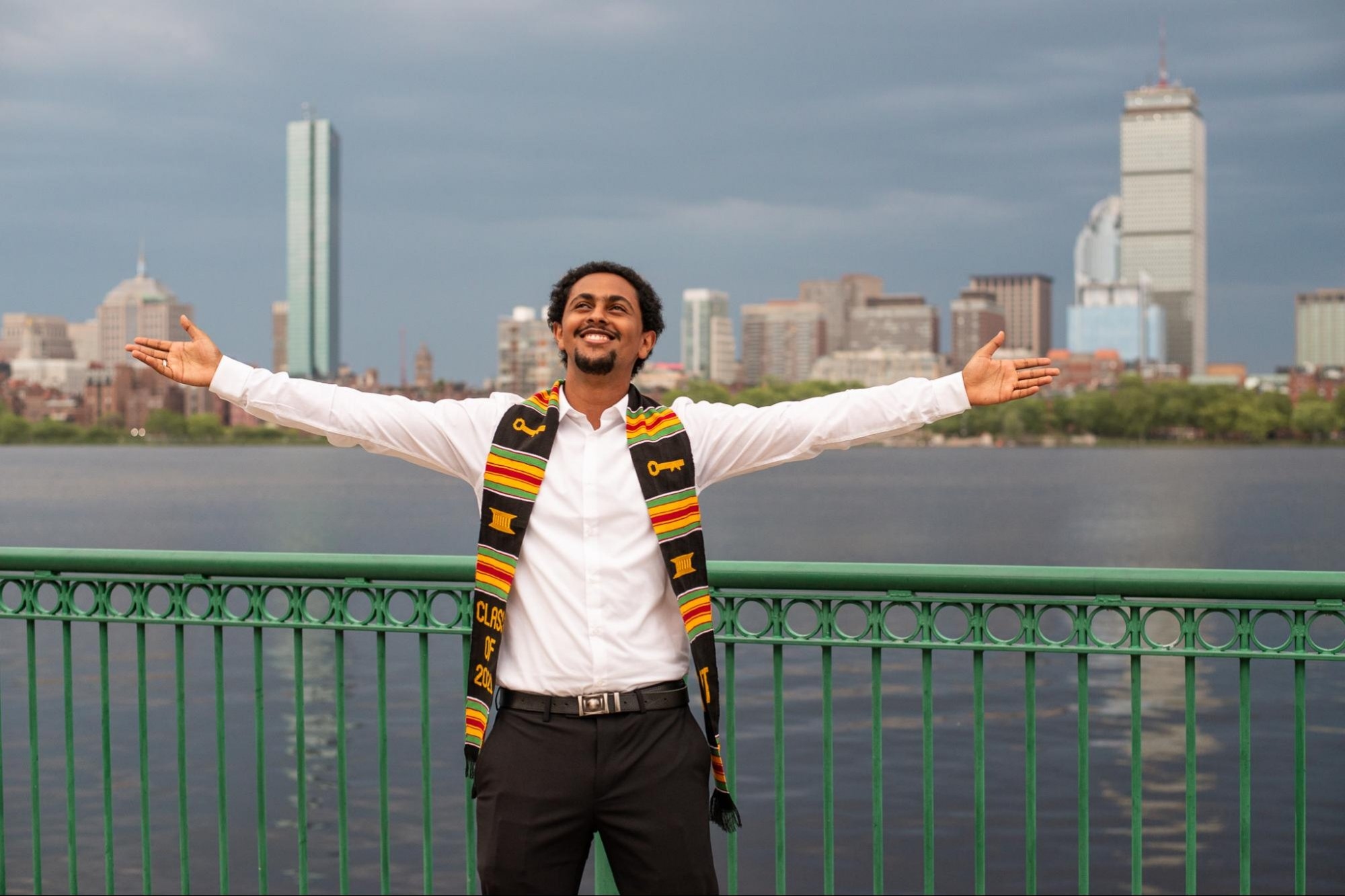 Minutes before finding out he’d been accepted to MIT, Mussie Demisse ’21 was shaking Governor Charlie Baker’s hand. Demisse was at an awards ceremony at the Massachusetts State House, being honored as one of the 2018 “29 Who Shine,” a select group of graduates from the Commonwealth’s higher education system who’d made an impact at their institution and in the community. For Demisse, Bunker Hill Community College, where he’d spent the previous two years studying computer science, represented both. “I really matured there,” he says, explaining that, at one point, he’d held three jobs at the college while also serving on student government and participating in various academic clubs.

Bunker Hill was also where Demisse got his first peek at the rigorous yet vibrant nature of an MIT classroom and began picturing himself in such an environment. In a linear algebra course, Demisse’s professor, Jie Frye, would regularly give out challenging quizzes that piqued his curiosity. “As kind of a motivator she would tell us this is the same quiz that MIT students take,” he recalls. “They’re learning the same material, so don’t beat yourself up, be proud of what you’re able to accomplish.” Demisse asked where his professor had gotten the MIT quizzes.

The answer wasn’t a secret connection, it turned out, but something called MIT OpenCourseWare (OCW). “She was one of my favorite professors at Bunker Hill,” Demisse says. “She emphasized that it’s possible for us to pursue our dreams — which isn’t as much of a thing, I think, in community college. There’s a lot of stigma, and I feel like that sometimes keeps people from applying to things. She was very intentional about making sure that we knew we could, and we should try.”

Demisse says OCW wasn’t the first time his interests had led him to MIT. But it was the final push he needed to apply to the school that he’d long set his heart on. Demisse grew up in Ethiopia, where he’d been involved in the Ethiopian Space Science Society, and when he arrived in Boston after high school, that childhood passion brought him to the MIT Astrophysics Colloquia. Learning that the colloquia welcomed members of the public to their weekly events, Demisse attended for a few months. Though he admits that he could understand only the first 10 minutes or so of every talk, he says, “I saw a part of MIT that was very much about advancing knowledge — done in such a supportive and cooperative way that I thought to myself, ‘Wow, it would be really cool if I could be a part of this community.’”

After the materials on OCW showed him he had not only the drive but the aptitude to turn this dream into a reality, Demisse began researching initiatives like MIT D-Lab, the lab dedicated to designing solutions for tackling poverty, and the Undergraduate Research Opportunities Program (UROP). “That’s when I said, it must be MIT,” he recalls.

Demisse graduated from MIT this spring with a bachelor’s degree in electrical engineering and computer science. But before coming to Bunker Hill and embarking on the path that would lead him to MIT, Demisse longed for opportunities to apply himself in the ways that his linear algebra professor described — to turn his aspirations into actions.

Growing up, Demisse had witnessed the devastating effects of global inequalities like poverty. But Ethiopia was also, he explains, where he’d learned that, when you recognize a problem, it falls upon you to do something about it. When it came time to choose his major at Bunker Hill, Demisse had no shortage of motivation. He knew it’d have to be something that would allow him to serve not only the Ethiopian community but underprivileged communities around the world that share similar challenges. Computer science struck Demisse as the perfect intersection of his goals, interests, and abilities. “It’s kind of a claim of responsibility for the issues that I’ve lived through or seen people that I care about go through,” he says.

Through OCW, Demisse found another outlet to channel this desire to help others. “I became somewhat of an evangelist for OCW,” he says, remembering reaching out to friends in Ethiopia who were also looking for resources to make a difference in their communities.

“I especially targeted the ones that felt like they wanted more, but couldn’t get it,” Demisse says. “And it really made me happy to do that because this is the same complaint I had when I was back home — you acknowledge the problems you know you want to invest yourself in, and you know you can build the discipline, but sometimes you feel like there’s nowhere to exert that discipline, that motivation. And I think OCW and similar platforms really allow you to build your capabilities to do what you can to solve the problem that you think is most important.”

Demisse also credits OCW with preparing him for life as an MIT student. “I think professors at MIT have this way of highlighting how hundreds of years of knowledge was built out — this focus on intuition — in order for students to project into the future, for students to be the next discoverers,” he observes. “And in OCW I saw this. I began to grasp the importance of knowing more than just the facts. Coming to MIT, this was fostered so much more.”

At MIT, Demisse joined the African Students Association, where he found another community to inspire him. He participated in UROP, completing a project with MIT D-Lab, the lab that Demisse had dreamed of joining years before. He’s taken an entrepreneurship class that has given him the tools to think about building social ventures in Ethiopia. Demisse also joined the MIT OpenCourseWare Faculty Advisory Committee as an undergraduate representative.

Bringing insights from his own experiences to the committee, Demisse advocates for more student involvement in the future of OCW. If the goal of OCW is to capture and share with the world as much of MIT as possible, he explains, then engaging the student community is paramount. Demisse also emphasizes the need for OCW, and MIT more broadly, to continue pioneering the open education resources movement. Now that he’s graduated he plans to continue working with OCW, focusing on increasing collaboration with community colleges and increasing access to universities in Africa.

Ultimately, Demisse sees open education resources as a way to bring people hope — the same hope he felt when he opened the email from MIT Admissions offstage at the State House and saw the word “congratulations.”