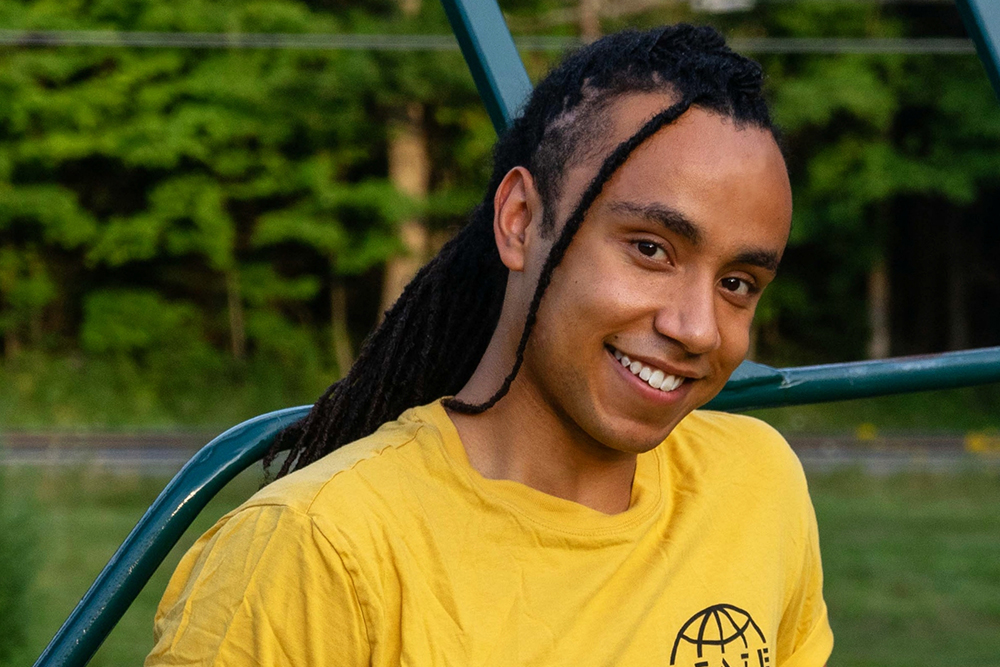 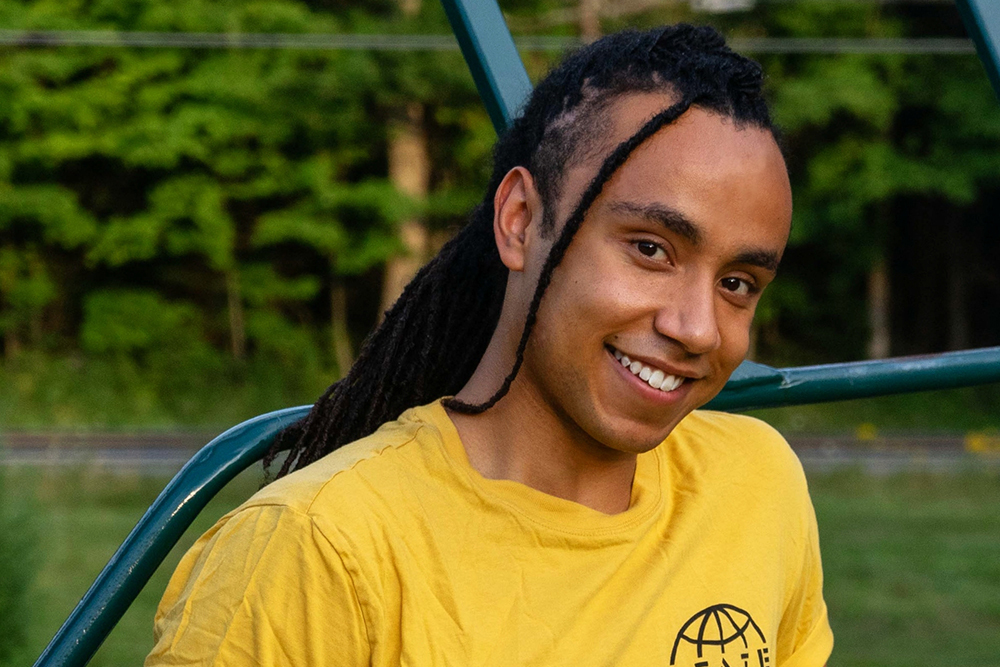 Miles Johnson graduated this June with degrees in mathematics and electrical engineering and computer science, and a minor in physics. But if he could add another concentration to his degree, then Johnson would add pandemic survival, which he passed with flying colors thanks to solid friendships formed during his time at MIT.

At San Francisco University High School, Johnson relied on a support network of teachers, program leaders, and friends that made it easy to push himself. Later, as an intern at the NASA Ames Research Center, he largely pushed himself. Among other accomplishments, he created a functional model in Architecture Analysis and Design Language for managing aircraft in the national airspace, picked up Java skills to develop an autonomous operation of the “Flappy Bird” game and to construct graphs of the Mandelbrot set, and used Python to program a simulation of a Stirling engine.

Moving to MIT as an undergraduate, he longed for an experience that married technical and social exploration. He was not disappointed, finding it was easy to make friends at the Institute. He settled into the Burton-Conner dorm, where he joined the Burton Third Bombers, serving as floor treasurer and weight room chair, and playing on its dodgeball and flag football teams.

“I didn’t join an exclusive clique of a couple friends. I joined a group of 50 interesting and exciting people who could make friends and have a good time wherever they went,” Johnson says. “Whenever I was burnt out from work, I just walked outside my room and inevitably found a couple people lounging about Burton Third to talk to. Before quarantine, there was almost never a week where I didn’t have a social event to look forward to. It was a huge part of my life and we’ve stayed close-knit and active, even virtually. I honestly have no idea what my experience at MIT would have been like without such a strong community behind me.”

Johnson was also active as a sprinter on the track and field team before injuring his knee, but that didn’t keep him off the Latin Dance Troupe, or rock climbing at Brooklyn Boulders. For the Design/Build/Fly club, he developed aircraft for the annual AIAA Design/Build/Fly competition, using foam wings using laser cutters, buzz saws, and SolidWorks CAD software.

“I would go play jazz at the end of every stressful Monday, and jam with friends on Saturdays. It was always nice to take a cathartic break from schoolwork to scream a sax solo.”

He tutored undergraduates in the Math Learning Center, graded problem sets for Course 6.046 (Design and Analysis of Algorithms), and helped adults attain high school credit at Just-A-Start Corporation in Cambridge, Massachusetts. Summer internships included gaining Secret Level Clearance as a systems intern with Northrop Grumman in 2018, where he researched collision predictions and developed analytical functions in MATLAB to predict the orbital paths of satellites.

As part of the 2019 SPUR+ summer research program offered by the Department of Mathematics, he wrote a paper titled “Some Graphical Realizations of Two-Row Specht Modules of Iwahori–Hecke Algebras of The Symmetric Group,” with Natalie Stewart and mentored by math graduate student Oron Propp, in a project suggested by Professor Roman Bezrukavnikov.

“This was my first time doing research in pure mathematics,” he says. “Our project was to prove an isomorphism between a fairly abstract group representation and a graphical one — in other words, to prove that two mathematical objects, one easy to work with and the other difficult, are mathematically equivalent. We ended up proving only part of our desired result, and afterward found a paper which proved it completely, but I still found the experience quite valuable, and it definitely gave me a taste of what math research is like.”

His first Undergraduate Research Opportunities Program (UROP) project was to implement an algorithm on a field-programmable gate array (FPGA) computer with the Condensed Matter Theory Group, to see whether it could compete with state-of-the-art optical networks and quantum computers. The group’s findings, “Heuristic recurrent algorithms for photonic Ising machines,” were published in Nature Communications.

During the pandemic, his other UROP was inspired by 18.102 (Introduction to Functional Analysis), taught by his academic advisor, Professor Richard Melrose. Johnson’s goal was to prove the Atiyah-Singer theorem for Dirac operators using A.P. Calderón’s formula. “It was, admittedly, a bit advanced for me, but I am happy I was introduced to differential geometry, a subject I would otherwise not have had the chance to take any classes on.”

But what kept him sane during the pandemic was his support system. He worked remotely from his San Francisco home, where he credits his moms and his dog Holiday with boosting his mental state. He went on socially distanced walks with close friends, and spent a month in Vermont with some fellow Bombers, before moving into an apartment in Cambridge last fall, including with his roommate’s dog, Raisin.

“While living at this apartment I’ve consistently had a group of around 10 friends to hang out with regularly, and it was definitely nice to have access to regular testing and worry a bit less about infecting my parents. Pretty much the only time I left my apartment was to travel to the climbing gym, so climbing has become a pretty central part of my pandemic experience.”

For his final project in 6.111 (Digital Systems Laboratory), Johnson built an FPGA-controlled sound-interactive LED display that flashed in time with music stored on an SD card, and graphically realized the frequency spectrum of music on stacked LED strips.

At the MIT Awards Convocation, he received the Ronald E. McNair Scholarship, established in McNair’s honor by the Black Alumni/ae of MIT, to recognize a Black undergraduate who has demonstrated strong academic performance and who has made a considerable contribution to the minority community.

“At MIT, I was definitely challenged, but not exactly how I thought I would be,” he recalls. “For me, most of the difficulty came because everyone around me was pushing hard, so I kept adding more things until I was pushing as hard as I could, too. I will never forget the many long nights working on an absurdly hard pset [problem set] with my classmates, drinking an energy drink for the first time at 4 a.m., or ordering Dominos to the Math Lounge. Even when I would pset alone, the class group chats were ripe with people willing to work with me when I was stuck. Probably the most important thing I’ve learned is how to approach new and unfamiliar tasks methodically, and how to persevere when everything doesn’t go perfectly.”

Johnson says that MIT totally prepared him for his next step, the applied physics PhD program at Caltech, where he’ll study quantum mechanics. But he plans to continue leaning on his MIT support system.

“I have met a huge variety of other undergrads entering diverse fields in research and industry, and whose knowledge I might need to draw on when I encounter hard problems in the future,” he says. “My time here has left me with a large network of people whose expertise I might be able to draw upon in the future, not to mention all the old class materials I have on my computer to reference when my memory fades. I’m excited for the journey!”