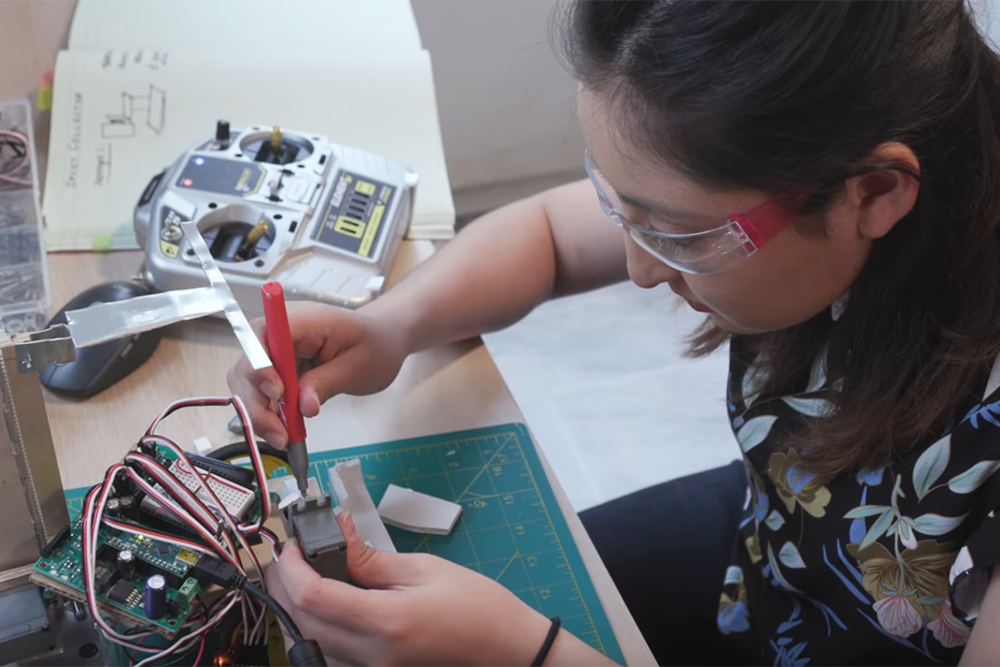 For the past 50 years, mechanical engineering students at MIT have convened on campus for a boisterous robot competition. Since the 1970s, when the late Professor Emeritus Woodie Flowers first challenged students to build a machine using a “kit of junk,” students in class 2.007 (Design and Manufacturing I) have designed and built their own robots to compete in the class’s final robot competition. For many students, the class and competition are a driving factor in their decision to enroll in MIT.

“Each year, students tell us that they came to MIT specifically to take 2.007 and participate in the mayhem of creating these robots and doing this fun competition,” says Amos Winter, associate professor of mechanical engineering and 2.007 co-lead instructor.

This was the case for Julianna Rodriguez, a rising senior studying mechanical engineering. “For me, 2.007 was the class I’ve been most looking forward to at MIT. It serves as a bridge between the technical classes I’ve taken and actually being able to build something tangible,” says Rodriguez.

As with many hands-on classes, in March 2020 the faculty and teaching staff of 2.007 had to scrap plans for in-person elements, including the iconic final robot competition. While the team quickly pivoted to a version of the class focused on computer-aided design (CAD) and analysis, many, including Winter, were left heartbroken that students weren’t able to build and compete with their robot as they had hoped.

“I really felt that students lost out on that physical connection to mechanical engineering that comes from hands-on work. They didn’t learn all those important lessons of building something in the real world, having it fail, then figuring out how to fix it,” says Winter.

Winter and 2.007 co-lead instructor, Sangbae Kim, professor of mechanical engineering, immediately started envisioning what 2.007 might look like in spring 2021.

“As an educator, it was such a great learning opportunity. The challenges forced us to think differently and be more creative,” adds Kim.

Knowing there would be many challenges associated with giving students the hands-on, confidence-building experience 2.007 usually provides, Winter led an effort to re-imagine the class and account for any eventuality. He secured resources from MIT’s Department of Mechanical Engineering, including hiring Antoni Soledad ’21, who participated in the Undergraduate Research Opportunity Program (UROP) under Winter’s guidance. Winter took the fall semester off from teaching so he could focus on developing an entirely new 2.007 curriculum that maintained the class’s core tenets, including how the team could pull off a live, head-to-head, remote robot competition.

The team developed a list of “must haves” when brainstorming how to re-envision 2.007. First and foremost was retaining the confidence-building element of students coming up with their own design and building it with their own two hands, while at the same time learning core mechanical engineering principles.

“It was critical for this year’s class for us to provide all the magic and deep engineering learning that comes from our normal hands-on experience, but do it in a remote environment,” adds Winter.

Central to all the teaching staff’s goals was equity. With some students likely participating fully remotely, the teaching team had to come up with solutions that were fair to everyone, whether they lived in a dorm, apartment, or across the country in their family’s home.

The team’s solution was to send a kit of materials to all 130 students in the class. The first generation of the kit was developed last summer by Soledad. By fall, Winter and Soledad were joined by teaching assistant Georgia Van de Zande and four other UROPs to continue iterating the kit. 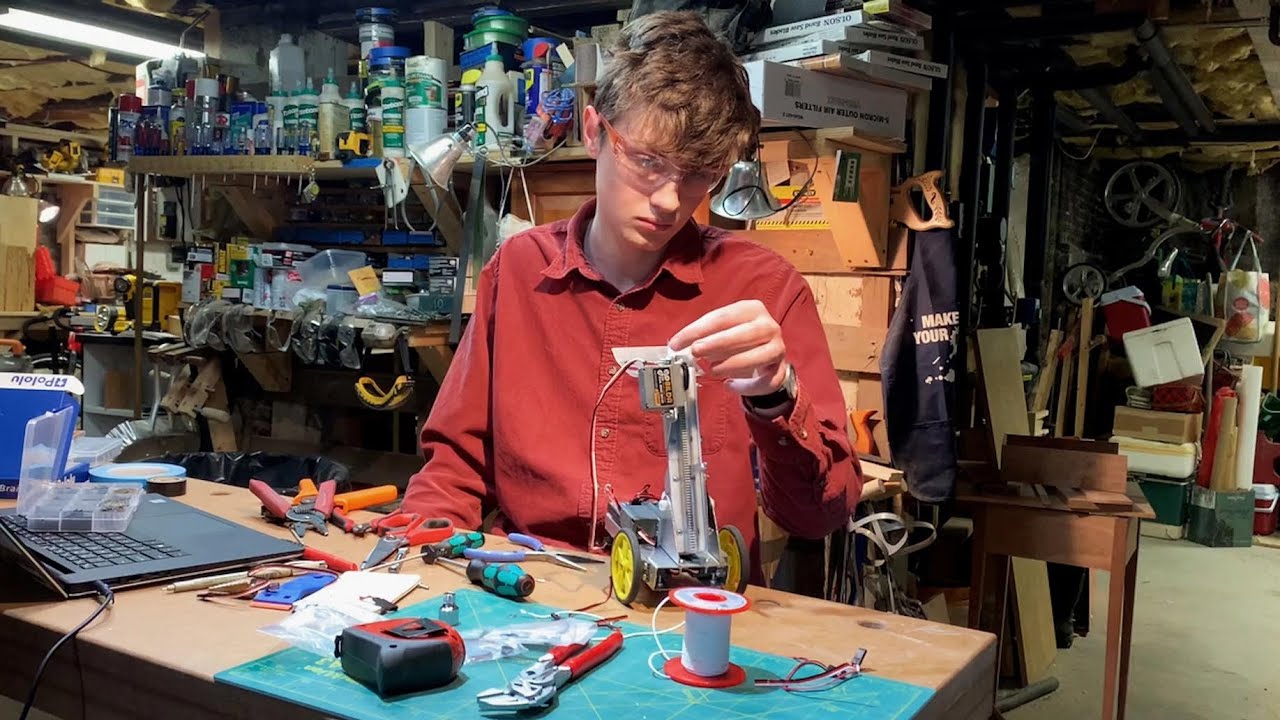 The team put a great deal of thought into the size, weight, and composition of these “Pappalardo-in-a-Box” kits. The result was a 130-pound kit filled with tools and materials students could use to build their own robots from home throughout the semester. There was enough variety in the materials to ensure each student could come up with their own creative and unique design.

“It’s really exciting that these students are starting their mechanical engineering journey with a literal toolbox full of tools they will use throughout their careers,” adds Van de Zande.

The team also identified a fitting theme for this year’s competition: “Home Alone: Together.” The theme was a nod to the classic holiday movie and the fact that students would be designing, building, and competing primarily from their homes throughout the semester.

With the kits delivered to students, Winter, Kim, and their team focused on how to actually teach students core design and manufacturing principles, regardless of where they were located.

All formal lab exercises were done virtually. Students would often meet one-on-one with instructors and lab staff via Zoom. This remote setup actually increased the amount of individual attention each student received from staff.

“In so many instances, virtual has been better than our normal format,” says Winter. “We have really meaningful one-on-one meetings with the students during our lab sections, because there’s no distractions like there would be in the physical lab.”

The class also featured an optional in-person element open to students who had access to campus. Those students would visit the Pappalardo lab in small groups to interact with lab staff. The Pappalardo shop staff set up socially distanced workstations where students could safely work in the lab and get staff feedback. These workstations featured the exact same tools and materials every student had at home. The staff made sure they were just as accessible via Zoom to the students who could not come to campus. 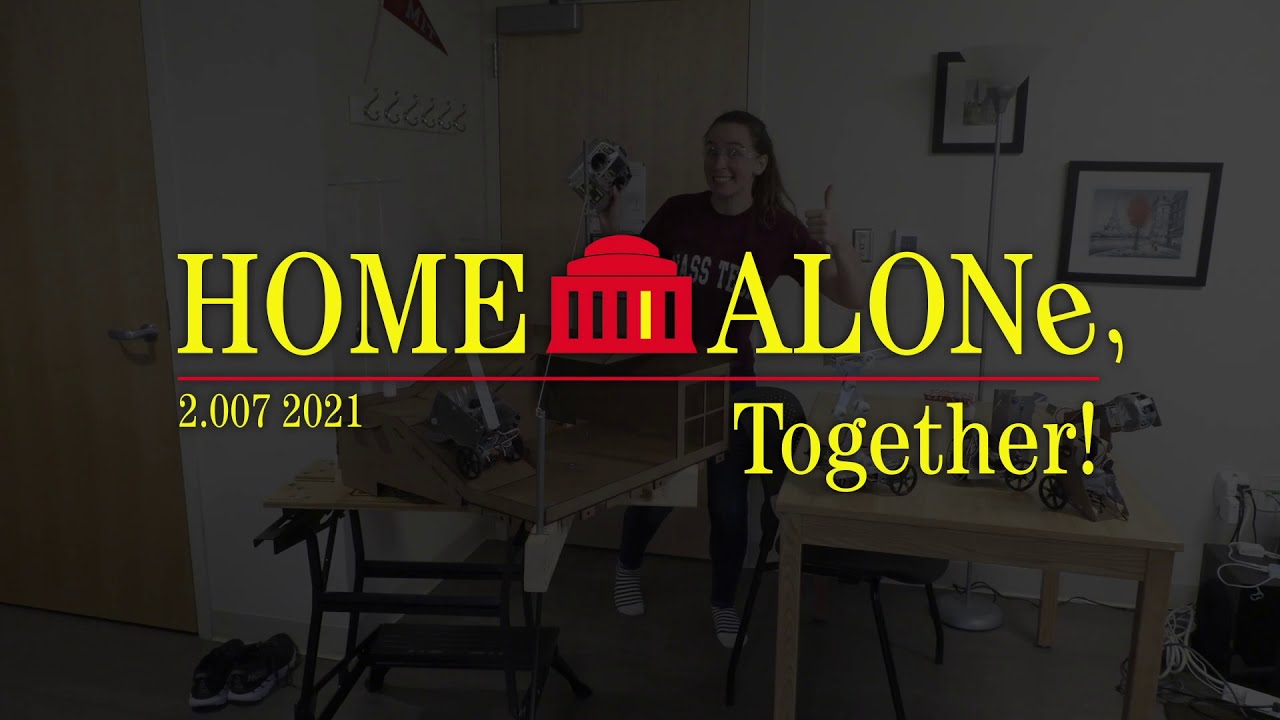 One new feature of this year’s class was “Bill’s Build Demos” — a series of videos spearheaded by Bill Cormier, project technician in the Pappalardo lab, and produced by the shop staff. These videos demonstrated common elements in robotic design and the nuances at play in fabrication and assembly. The demos proved to be crucial in deepening students’ understanding of mechanism design; this was reflected in the quality and reliability of the robots they produced for the final competition.

The individual attention and dedication the 2.007 teaching team showed throughout the semester had a tangible impact on students.

“In my honest opinion, the 2.007 staff has been one of the most nurturing and understanding faculty that I’ve ever encountered,” says Megan Ngo, a rising junior studying mechanical engineering. “I’ve learned so much: the physics behind making a part, how to start a project from start to finish and just how cool mechanical engineering can be in the real world.”

Students put the skills they learned throughout the semester to the test. Armed with their unique robot design, their own game board, and a camera, students were ready to participate in the first known live, head-to-head, remote physical robot competition.

The settings for the competition varied. Ben Owen Block and his roommate who also took the class organized the layout of their dorm room around the competition. Senior Julianna Rodriguez built her robot from an apartment in West Roxbury, Massachusetts. John Malloy started the semester in Colorado before moving home to Florida, where he built his robot in his childhood bedroom.

Dressed as “Home Alone” villains Harry and Marv, Winter and Kim emceed the competition as students’ robots went head-to-head in a series of elimination rounds. While each robot competed from a different location, the two competitors per round ran at the same time with their video feeds mixed into a live webcast. Robots performed tasks on a game board, modeled after the booby-trapped McCallister house from the movie. The robot that earned the most points would survive onto the next round.

In the end, Jordan Ambrosio’s robot emerged as the champion. But according to Winter, everyone was a winner this year.

“To come out of this semester, see what the students accomplished, and know that the educational experience of the class has been retained, it feels triumphant,” says Winter.

“We found that students could manage their time much better when they had their tools and materials right in their rooms,” says Kim.

While the 2022 robot competition will hopefully be back in the Johnson Ice Rink, the 2.007 teaching team plans on incorporating many of the positive changes made in reaction to the pandemic to future semesters.