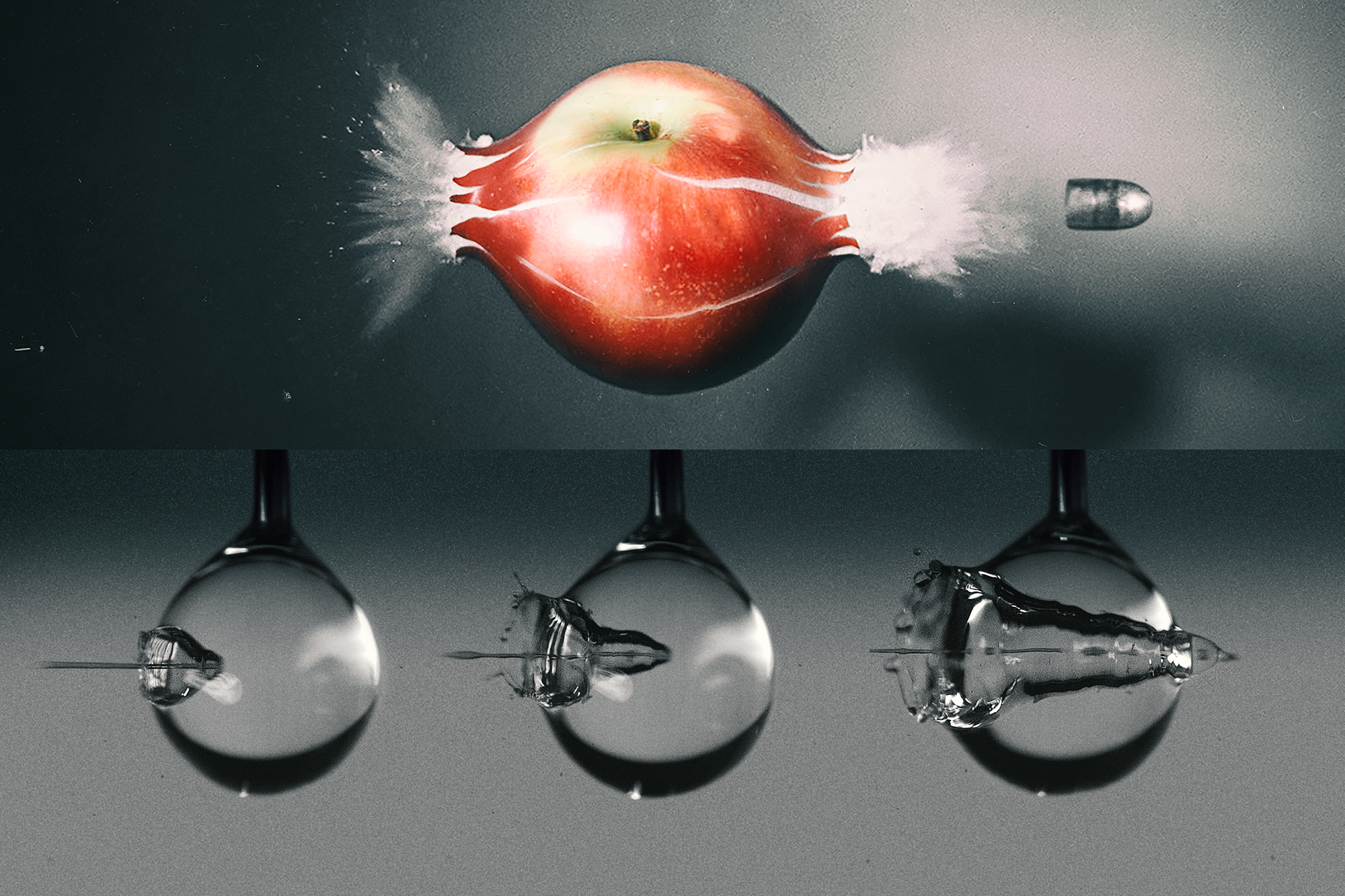 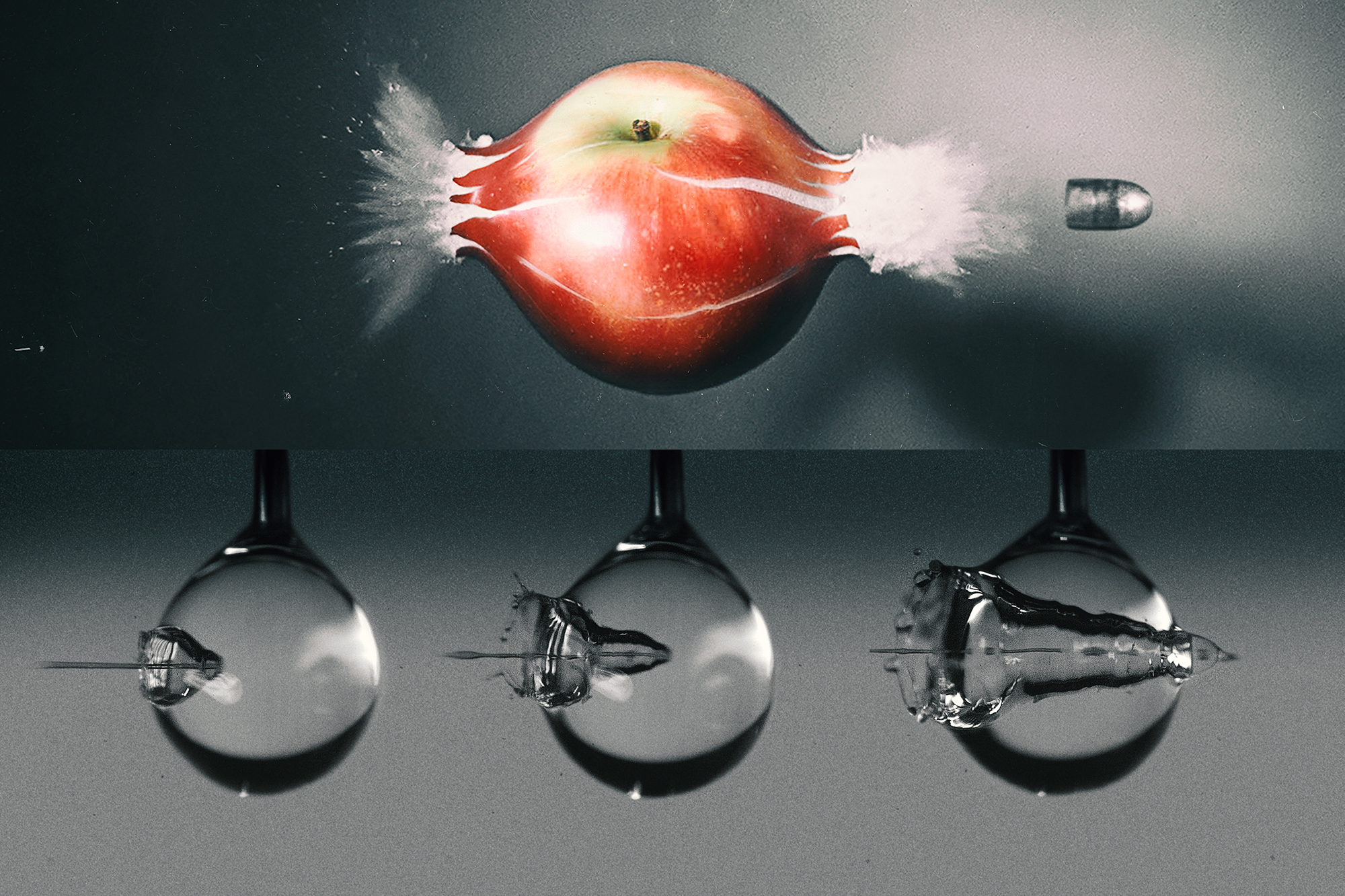 That’s the motivation behind a new study by engineers at MIT and the University of Twente in the Netherlands. The study involves firing small jets of water through many kinds of droplets, hundreds of times over, using high-speed cameras to capture each watery impact. The team’s videos are reminiscent of the famous strobe-light photographs of a bullet piercing an apple, pioneered by MIT’s Harold “Doc” Edgerton.

Edgerton’s images captured sequential images of a bullet being shot through an apple, in explosive detail. The MIT team’s new videos, of a water jet fired through a droplet, reveal surprisingly similar impact dynamics. As the droplets in their experiments are transparent, the researchers were also able to track what happens inside a droplet as a jet is fired through.

Based on their experiments, the researchers developed a model that predicts how a fluid jet will impact a droplet of a certain viscosity and elasticity. As human skin is also a viscoelastic material, they say the model may be tuned to predict how fluids could be delivered through the skin without the use of needles.

“We want to explore how needle-free injection can be done in a way that minimizes damage to the skin,” says David Fernandez Rivas, a research affiliate at MIT and professor at the University of Twente. “With these experiments, we are getting all this knowledge, to inform how we can create jets with the right velocity and shape to inject into skin.”

Rivas and his collaborators, including Ian Hunter, the George N. Hatsopoulos Professor in Thermodynamics at MIT, have published their results in the journal Soft Matter.

Current needle-free injection systems use various means to propel a drug at high speed through the skin’s natural pores. For instance, MIT spinout Portal Instruments, which has sprung from Hunter’s group, centers on a design that uses an electromagnetic actuator to eject thin streams of medicine through a nozzle at speeds high enough to penetrate through skin and into the underlying muscle.

Hunter is collaborating with Rivas on a separate needle-free injection system to deliver smaller volumes into shallower layers of the skin, similar to the depths at which tattoos are inked.

“This regime poses different challenges but also gives opportunities for personalized medicine,” says Rivas, who says medicines such as insulin and certain vaccines can be effective when delivered in smaller doses to the skin’s superficial layers.

Rivas’ design uses a low-power laser to heat up a microfluidic chip filled with fluid. Similar to boiling a kettle of water, the laser creates a bubble in the fluid that pushes the liquid through the chip and out through a nozzle, at high speeds.

Rivas has previously used transparent gelatin as a stand-in for skin, to identify speeds and volumes of fluid the system might effectively deliver. But he quickly realized that the rubbery material is difficult to precisely reproduce.

“Even in the same lab and following the same recipes, you can have variations in your recipe, so that if you try to find the critical stress or velocity your jet must have to get through skin, sometimes you have values one or two magnitudes apart,” Rivas says.

The team decided to study in detail a simpler injection scenario: a jet of water, fired into a suspended droplet of water. The properties of water are better known and can be more carefully calibrated compared to gelatin.

In the new study, the team set up a laser-based microfluidic system and fired off thin jets of water at a single water droplet, or “pendant,” hanging from a vertical syringe. They varied the viscosity of each pendant by adding certain additives to make it as thin as water, or thick like honey. They then recorded each experiment with high-speed cameras.

Playing the videos back at 50,000 frames per second, the researchers were able to measure the speed and size of the liquid jet that punctured and sometimes pierced straight through the pendant. The experiments revealed interesting phenomena, such as instances when a jet was dragged back into a pendant, due to the pendant’s viscoelasticity. At times the jet also generated air bubbles as it pierced the pendant.

“Understanding these phenomena is important because if we are injecting into skin in this way, we want to avoid, say, bringing air bubbles into the body,” Rivas says.

The researchers looked to develop a model to predict the phenomena they were seeing in the lab. They took inspiration from Edgerton’s bullet-pierced apples, which appeared similar, at least outwardly, to the team’s jet-pierced droplets.

They started with a straightforward equation to describe the energetics of a bullet fired through an apple, adapting the equation to a fluid-based scenario, for instance by incorporating the effect of surface tension, which has no effect in a solid like an apple but is the main force that can keep a fluid from breaking apart. They worked under the assumption that, like a bullet, the fired jet would maintain a cylindrical shape. They found this simple model roughly approximated the dynamics they observed in their experiments.

But the videos clearly showed that the jet’s shape, as it penetrated a pendant, was more complex than a simple cylinder. So, the researchers developed a second model, based on a known equation by physicist Lord Rayleigh, that describes how the shape of a cavity changes as it moves through a liquid. They modified the equation to apply to a liquid jet moving through a liquid droplet, and found that this second model produced a more accurate representation of what they observed.

The team plans to carry out more experiments, using pendants with properties even more like those of skin. The results from these experiments could help fine-tune the  models to narrow in on the optimal conditions for injecting drugs, or even inking tattoos, without using needles.

This research was supported in part by the European Research Council under the European Union Horizon 2020 Research and Innovation Programme.