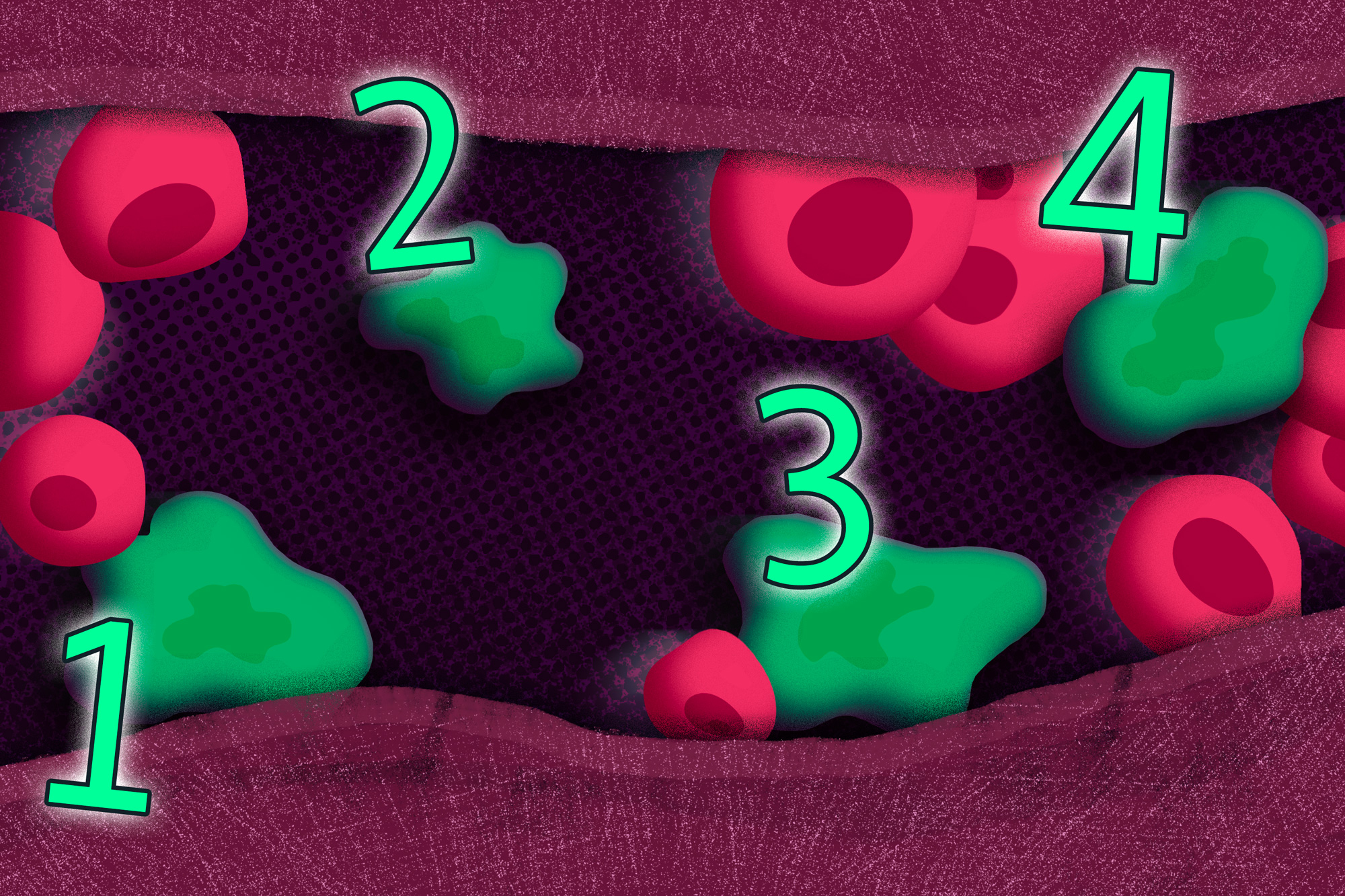 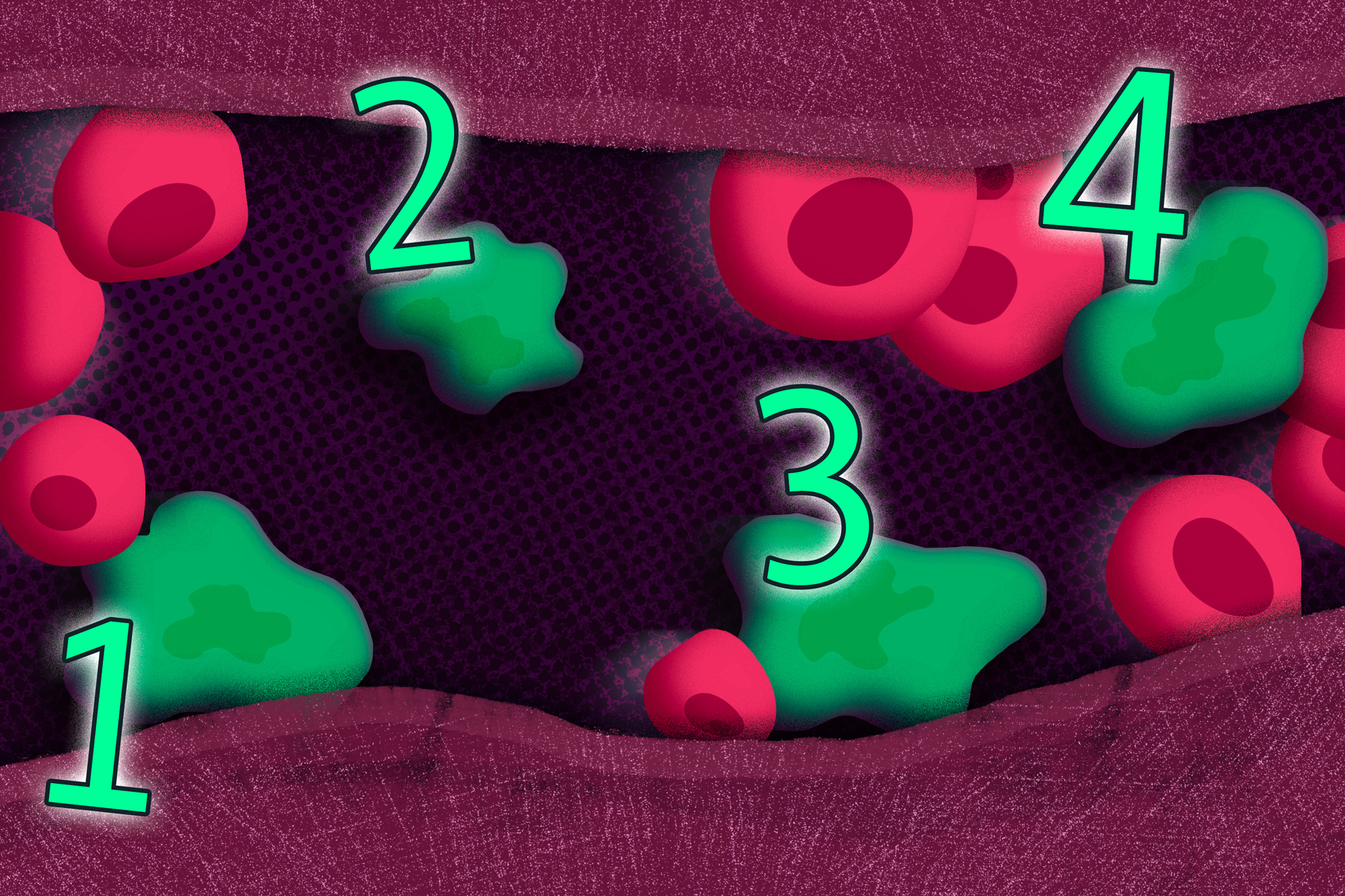 As tumors grow within an organ, they also release cells that enter the bloodstream. These cells can travel to other organs, seeding new tumors called metastases.

MIT engineers have now developed a technique that, for the first time, allows them to measure the generation rate of these circulating tumor cells (CTCs) in mice. Their approach, which also reveals how long CTCs survive once released into the bloodstream, could help scientists learn more about how different types of cancers spread through the body.

“By exchanging blood between mice while counting CTCs in real-time, we obtained a direct measurement of how quickly CTCs enter the circulation and how long it takes before they’re cleared,” says Scott Manalis, the David H. Koch Professor of Engineering in the departments of Biological Engineering and Mechanical Engineering, a member of the Koch Institute for Integrative Cancer Research, and the senior author of the study.

Using their new system, the researchers were able to study CTCs from pancreatic tumors as well as two types of lung tumors.

Graduate student Alex Miller and Bashar Hamza PhD ’20, a Koch Institute visiting scientist, are the lead authors of the paper, which appears today in Nature Communications.

Circulating tumor cells are rare in patients: One milliliter of blood might contain between one and 10 such cells. In recent years, researchers have devised strategies to capture these elusive cells, which can yield a great deal of information about a patient’s tumor, and even help doctors track how a tumor is responding to treatment.

“Circulating tumor cells are attractive because you can get them from blood and they provide a window into the tumor. It’s a lot easier than biopsying the tumor,” Manalis says.

In mice, CTCs are even more difficult to find because mice only have a little more than 1 milliliter of blood. Being able to study CTCs in mice could help researchers answer many outstanding questions about how rapidly these cells are shed by tumors, how long they survive in circulation, and how efficiently they seed new tumors, Manalis says.

To try to answer some of those questions, Manalis and his students designed a system that lets them remove blood from a mouse with a tumor and flow it into a healthy mouse. Through a separate tube, blood from the healthy mouse flows back to the tumor-bearing mouse. The system includes two cell-counters (one for each mouse) that detect and remove circulating tumor cells from the blood.

Using this setup, the researchers can analyze all of the blood from each mouse in less than an hour. After determining the concentration of CTCs in the bloodstream of the tumor-bearing mouse and of the healthy mouse, they can calculate the rate at which CTCs are generated in the tumor-bearing mouse. They can also calculate the half-life of the cells — a measure of how long they survive in the bloodstream before being cleared by the body.

They found that the half-life of CTCs was fairly similar between the three types of tumors, with values ranging from 40 seconds to about 250 seconds. However, the generation rates showed much more variability between different tumor types. Small cell lung tumors, which are known to be aggressively metastatic, could shed more than 100,000 CTCs per hour, while non-small cell lung tumors and pancreatic tumors shed as few as 60 CTCs per hour.

Previous studies that relied on injecting tumor cells from cell lines cultivated in the lab have found that those cells had a half-life of only a few seconds in the bloodstream, but the new results from Manalis’ lab suggest that endogenous CTCs actually persist much longer than that.

The researchers also showed that the healthy mice that received CTCs later developed metastases, even after only exchanging a few thousand CTCs. They found that CTCs from small-cell lung tumors formed metastases in the livers of the recipient healthy mice, just as they did in the mice where the tumors originally formed.

“What we realized was that these CTCs that we’re injecting into the healthy recipient mouse start to grow and create metastases that we can detect after a couple of months,” Hamza says. “That was exciting to observe because it validated that our blood-exchange technique can also be used to gently inject a viable CTC sample in its native blood environment without having to enrich it using harsh in vitro techniques.”

Using this approach, researchers now hope to study how different drug treatments influence CTC levels. “With this system, we can look at real-time concentration of CTCs, so we can perform a drug treatment and look at how it is affecting half-life time and generation rate,” Miller says.

The researchers also plan to study other types of cancers, including blood cancers such as leukemias and lymphomas, using this system. The technique could also be used to study the circulation dynamics of other kinds of cells, including immune cells such as neutrophils and natural killer cells.