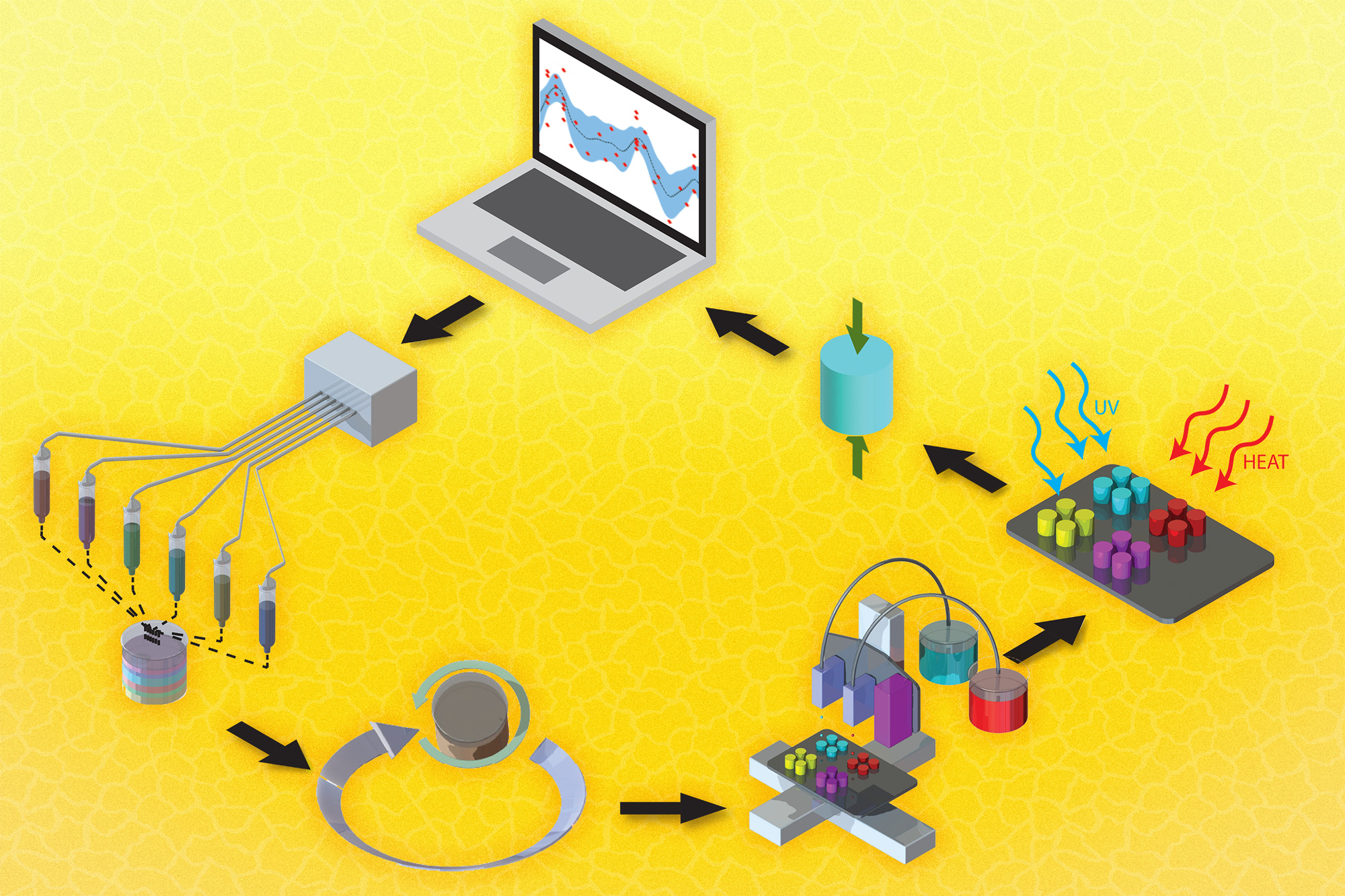 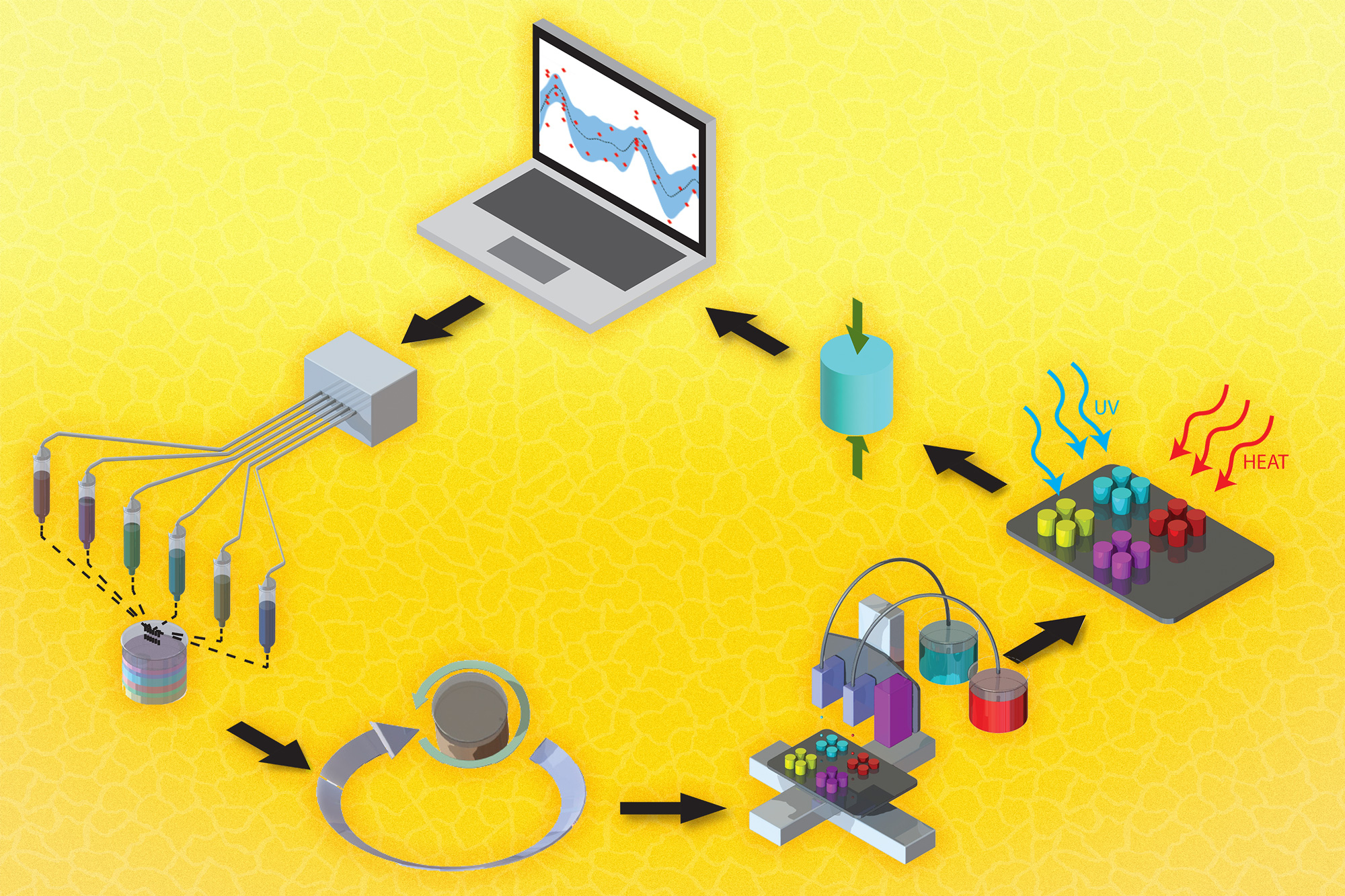 The growing popularity of 3D printing for manufacturing all sorts of items, from customized medical devices to affordable homes, has created more demand for new 3D printing materials designed for very specific uses.

To cut down on the time it takes to discover these new materials, researchers at MIT have developed a data-driven process that uses machine learning to optimize new 3D printing materials with multiple characteristics, like toughness and compression strength.

By streamlining materials development, the system lowers costs and lessens the environmental impact by reducing the amount of chemical waste. The machine learning algorithm could also spur innovation by suggesting unique chemical formulations that human intuition might miss.

“Materials development is still very much a manual process. A chemist goes into a lab, mixes ingredients by hand, makes samples, tests them, and comes to a final formulation. But rather than having a chemist who can only do a couple of iterations over a span of days, our system can do hundreds of iterations over the same time span,” says Mike Foshey, a mechanical engineer and project manager in the Computational Design and Fabrication Group (CDFG) of the Computer Science and Artificial Intelligence Laboratory (CSAIL), and co-lead author of the paper.

In the system the researchers developed, an optimization algorithm performs much of the trial-and-error discovery process.

A material developer selects a few ingredients, inputs details on their chemical compositions into the algorithm, and defines the mechanical properties the new material should have. Then the algorithm increases and decreases the amounts of those components (like turning knobs on an amplifier) and checks how each formula affects the material’s properties, before arriving at the ideal combination.

Then the developer mixes, processes, and tests that sample to find out how the material actually performs. The developer reports the results to the algorithm, which automatically learns from the experiment and uses the new information to decide on another formulation to test.

“We think, for a number of applications, this would outperform the conventional method because you can rely more heavily on the optimization algorithm to find the optimal solution. You wouldn’t need an expert chemist on hand to preselect the material formulations,” Foshey says.

The researchers have created a free, open-source materials optimization platform called AutoOED that incorporates the same optimization algorithm. AutoOED is a full software package that also allows researchers to conduct their own optimization.

The researchers tested the system by using it to optimize formulations for a new 3D printing ink that hardens when it is exposed to ultraviolet light.

They identified six chemicals to use in the formulations and set the algorithm’s objective to uncover the best-performing material with respect to toughness, compression modulus (stiffness), and strength.

Maximizing these three properties manually would be especially challenging because they can be conflicting; for instance, the strongest material may not be the stiffest. Using a manual process, a chemist would typically try to maximize one property at a time, resulting in many experiments and a lot of waste.

The algorithm came up with 12 top performing materials that had optimal tradeoffs of the three different properties after testing only 120 samples.

Foshey and his collaborators were surprised by the wide variety of materials the algorithm was able to generate, and say the results were far more varied than they expected based on the six ingredients. The system encourages exploration, which could be especially useful in situations when specific material properties can’t be easily discovered intuitively.

Faster in the future

The process could be accelerated even more through the use of additional automation. Researchers mixed and tested each sample by hand, but robots could operate the dispensing and mixing systems in future versions of the system, Foshey says.

Farther down the road, the researchers would also like to test this data-driven discovery process for uses beyond developing new 3D printing inks.

“This has broad applications across materials science in general. For instance, if you wanted to design new types of batteries that were higher efficiency and lower cost, you could use a system like this to do it. Or if you wanted to optimize paint for a car that performed well and was environmentally friendly, this system could do that, too,” he says.

Because it presents a systematic approach for identifying optimal materials, this work could be a major step toward realizing high performance structures, says Keith A. Brown, assistant professor in the Department of Mechanical Engineering at Boston University.

“The focus on novel material formulations is particularly encouraging as this is a factor that is often overlooked by researchers who are constrained by commercially available materials. And the combination of data-driven methods and experimental science allows the team to identify materials in an efficient manner. Since experimental efficiency is something with which all experimenters can identify, the methods here have a chance of motivating the community to adopt more data-driven practices,” he says.

The research was supported by BASF