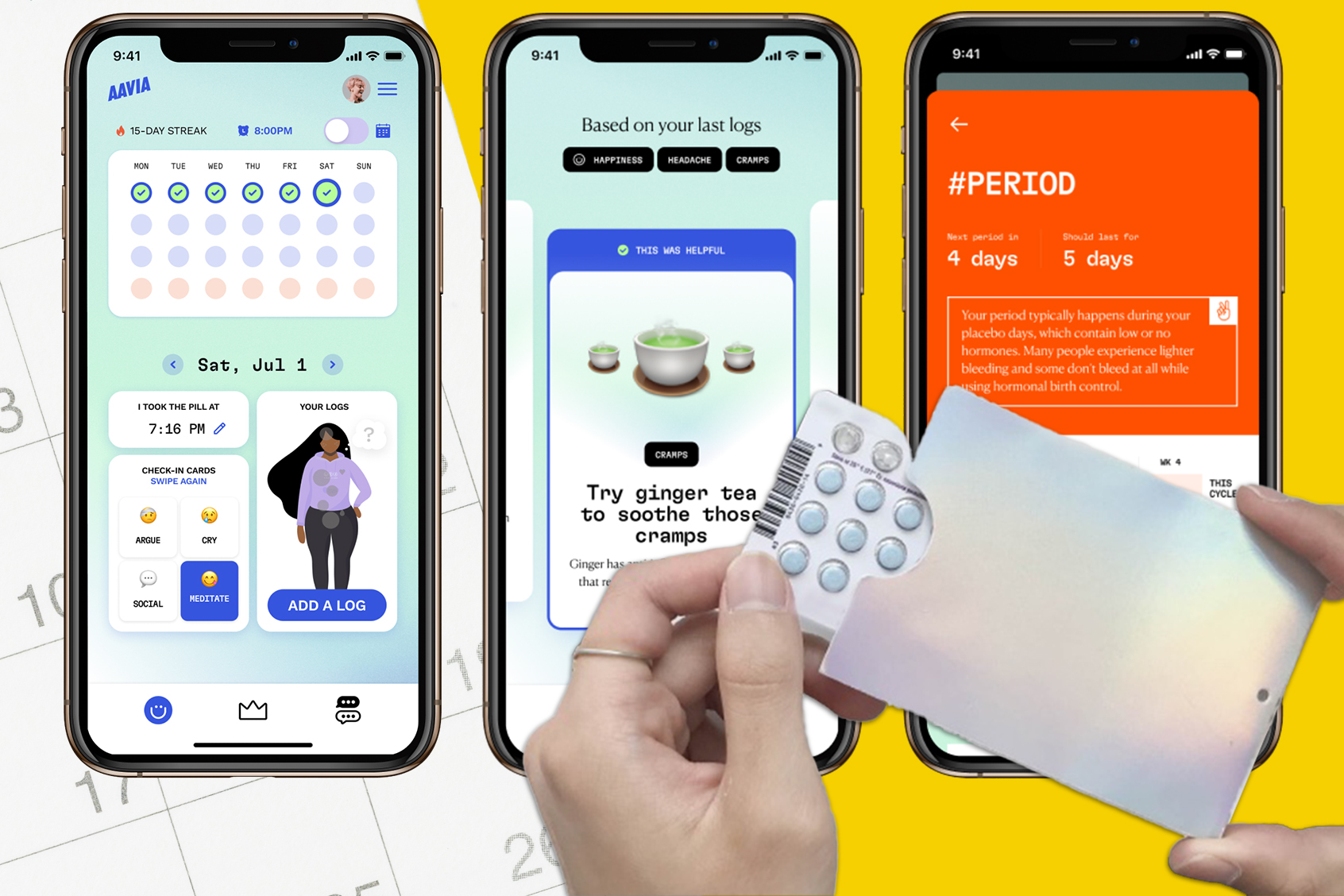 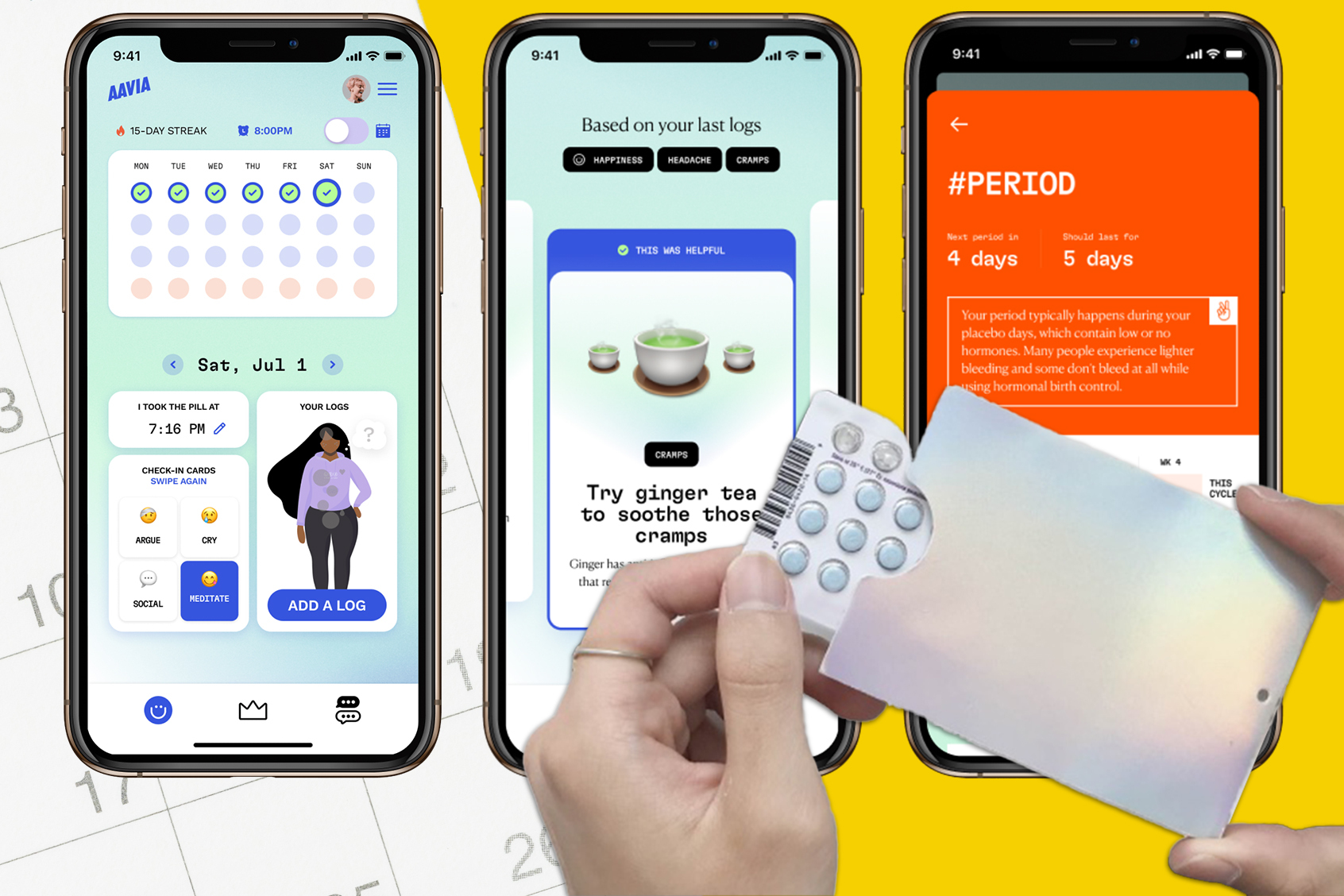 Half the population lives with monthly ovarian hormone cycles. Those cycles impact menstrual patterns, fertility, and much more, but stigmas around hormone problems have limited awareness about hormone health.

Now, Aavia is working to help people understand their hormone cycle and its impacts.

“These cycles impact quality of sleep, quality of muscle toning, energy, sex drive, skin health, mental health, energy levels — you name it — but nobody is talking about this,” CEO Aagya Mathur MBA ’18 says. “We see a world where people can use their hormone cycles to benefit them day to day — to make them a superpower rather than something they are dreading or feel is a burden.”

The startup, which was conceived during the MIT Entrepreneurship and Maker Skills Integrator (MEMSI), achieves that through a combination of education, community, and technology.

Aavia‘s flagship product is a patented smart pill case that can sense when users take birth control pills, and remind them through a mobile app if they forget. In addition to sending these notifications, the app and its accompanying website allow users to track changes they notice throughout their cycle, get personalized recommendations, learn from peers and medical experts, and engage with a community dealing with similar problems.

“[Raising awareness about hormonal health] isn’t something that can happen overnight, so we decided to start by addressing a problem that people already understand they have, which is remembering to take their birth control pill,” Mathur says. “From there, we’ve broadened our services based on what we’ve learned is working and not working for our users.”

Mathur, along with Aavia co-founders Alexis Wong and Aya Suzuki ’18, say they’re driven by the stories they hear from people who have used Aavia’s services to address problems with things like anxiety and acne that they’ve struggled with for years without realizing they were related to hormones.

An idea is hatched

Wong and Suzuki met at MEMSI, an intensive two-week bootcamp that challenges student participants from MIT and Hong Kong to build a hardware startup. Suzuki had worked in a rehabilitation facility and saw the problems people had with treatment adherence. They began developing a pill pack that could sense when pills were still in their tinfoil packaging and send reminders to users via smartphones. They were later introduced to Mathur through a mutual friend who had also participated in MEMSI.

The founders spoke to hundreds of people with a variety of health problems to determine where they could make the biggest difference. The three made for a diverse founding team: Mathur had studied neuroscience as an undergrad and thought she was going to be a doctor until she got into consulting and decided an MBA at MIT was a better path. Wong was studying electrical engineering at Hong Kong University, and Suzuki was an undergraduate at MIT studying mechanical engineering and design.

Mathur, who began waking up in the middle of the night writing down ideas and questions about the business, was thrilled to be in an interdisciplinary environment during her MBA program.

“Sloan was one of the only schools that says ‘One MIT’ rather than, ‘We’re the business school and we have everything we need,’” Mathur says. “I thought that was really great because then you could be in clubs with people from other areas. Multidisciplinary teams are extremely important to have the kind of impact we seek to have.”

The founders say it was helpful to be students as they began building the company. They received support from MIT Sandbox, the MIT Venture Mentoring Service, and went through the startup accelerators MIT delta v and MIT fuse. They also won the audience choice award during the MIT $100K Entrepreneurship Competition.

“Starting a company at MIT is amazing because you have so many resources, both financial and educational,” Mathur says.

Today the founders continue to get value from MIT’s network, meeting with former classmates and alumni — Mathur even refers to the class notes she took as an MBA student from time to time.

A new approach to hormone health

After surveying thousands of people, the founders learned people wanted an app that went beyond tracking periods or moods to actually give users health and behavioral tips.

“We’re helping you understand your hormone cycle through your own reporting, but the big thing is we also give you actionable insights,” Mathur says. “For example, these are the three days where you have the highest energy and here’s how you can take advantage of it, or these are the four days when you have the most anxiety, here’s what you can do to help reduce it. Or, it’s coming up so here are steps you can take to make sure it’s not as bad as it has been in the past.”

Aavia, which has an advisory boards of MDs, devotes a lot of resources to educational efforts, making blog posts and videos, hosting events, holding forums in the app with doctors four days a week, and engaging on social media. In community forums, users can ask questions, share stories or fears, and offer support. Aavia has also been grouping members with similar experiences together, like those who are taking the same acne medication or dealing with similar health journeys.

“The more people that we can get in front of, the more they can tell other people and help each other out,” Mathur says.

The results have been promising. One of Aavia’s members was being treated with clinical depression when she began tracking her mood on the app. The user brought that data to her doctor, who realized the depressive symptoms were much more severe during specific time periods. The data helped the doctor change her diagnosis to premenstrual dysphoric disorder, which is treated differently than clinical depression.

“The stories that we hear are really what get me out of bed in the morning,” Mathur says. “To see we changed this person’s outlook on something, we helped this person understand that they actually needed a different treatment, or knowing this person feels this change in confidence or stress. Those are actually two of our biggest success metrics: decreasing stress and increasing confidence. That’s where we’re seeing significant changes.”

Most of Aavia’s members are 18 to 24 years old, a demographic Mathur says is much more open to talking about hormone problems. For the founders, it all goes back to Aavia’s mission of setting a new paradigm for hormone health.

“We hear most consistently from people who feel like they’re neglected or who are dealing with a problem that nobody else is paying attention to,” Mathur says. “Our members tell us they don’t necessarily trust the big health care companies, but they trust us. We’re focused on what we can do to have a lasting impact as users go through their hormone health journey.”