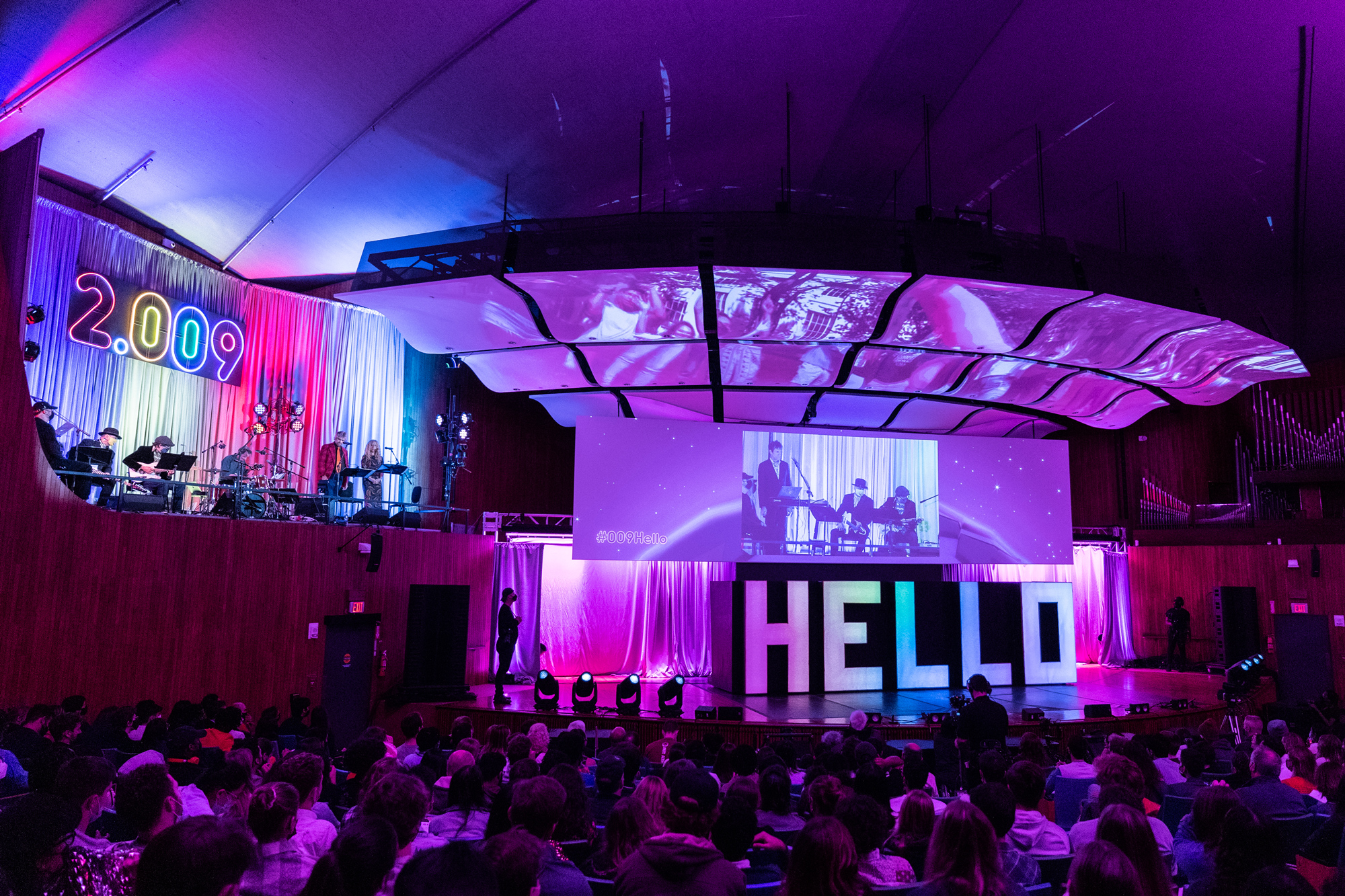 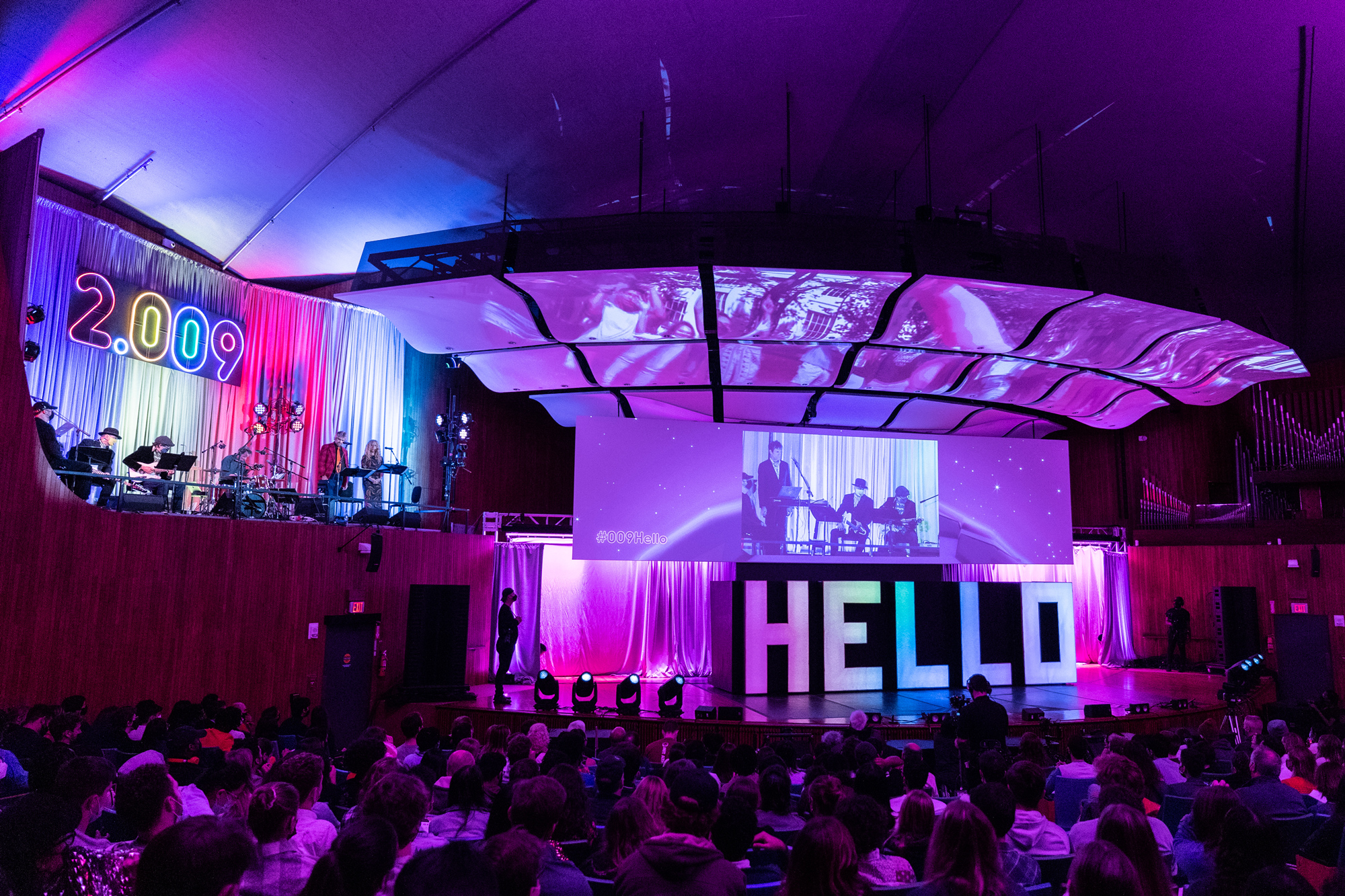 On Monday night, Kresge Auditorium was lit up in the colors of the rainbow as a vibrant welcome for the final presentations of 2.009, MIT’s popular Product Engineering Processes course. After going virtual in 2020, the annual event was back in exuberant, pom-pom-waving form, with Covid-19 precautions in place to help ensure a safe and spectacular in-person show.

To attend the night’s festivities, everyone 12 years and older was required to be vaccinated, and all guests were required to wear masks indoors. At the door, course members handed out KF-94 masks to those who did not have a comparably protective face covering. With these safety measures in place, nearly 1,000 attendees, including more than 50 course staff and volunteers, filled Kresge to capacity as this year’s 149 students, working in eight design teams, prepared to pitch and demonstrate their new products. Another 4,100-plus viewers tuned in to watch live online.

The products are the culmination of 2.009, a course that gives students a taste of what engineers in a product development firm might go through to design a new product. Students are grouped into color-coded design teams and work together through the semester to envision, design, build, and draw up a business plan for a product, inspired each year by a different theme.

This year’s theme was simply, “Hello!” which course instructors chose as “a greeting, a beginning, a friendly signal, and an invitation to engage.” Students were encouraged to design products that would welcome users to new and meaningful experiences.

The night kicked off in playful fashion with a video of a cartoon alien, which made similar appearances throughout the night. In the opening video, the animated visitor hovered over Kresge Auditorium, playing a five-note tune that mirrored the five letters in the word “Hello.” The tune was echoed by Kresge’s pipe organ, played live in the auditorium by an organist who then riffed on the musical greeting, transforming it into a sprawling improvisation. A house band then revved up the proceedings by belting out a rendition of Måneskin’s “Beggin,” sung to lyrics tailored to 2.009:

Onstage, large illuminated block letters spelled out the word HELLO, then parted in the middle with a dramatic whoosh of smoke, to usher each team onstage to pitch their products. Leading the festivities was 2.009 instructor David Wallace, professor of mechanical engineering and the event’s longtime master of ceremonies, who sported his signature rainbow-sequined vest and top hat.

The Blue Team was first to take the stage, with an eye-opening statistic: Over 2 million people worldwide have photosensitive epilepsy, a condition in which flashing lights can trigger debilitating seizures. The team’s solution is Eclipse, a pair of glasses that automatically darkens in response to flashing lights in the environment. The glasses have a built-in microprocessor and circuit board that processes light levels and sends a signal through the glasses to block incoming light if it senses flashing within a range that doctors have identified as inducing seizures. As part of its business plan, the team estimates the glasses could retail for around $600, potentially offering patients “a new way to see the world.”

Next was the Orange Team, with Escalate — a lightweight wheelchair attachment that helps boost a user up and over a curb. Escalate consists of two antislip rods that attach to the back of a wheelchair and can extend or retract wirelessly. A volunteer demonstrated the device onstage by first popping a wheelie to lift the front of his wheelchair over a manufactured curb. He then used a remote control to extend the rods toward the ground, which in turn lifted the back of the chair up and over the curb. Once stable, the user pressed a button to retract the rods. The system can lift up to 400 pounds in under 20 seconds, and should retail at around $900, with the potential to help wheelchair users “rise above life’s challenges.”

The Purple Team made its entrance with Vulcan, a cordless handheld tool designed to make the task of soldering less cumbersome. Soldering is the process of applying heat to join together different metals such as wires. Often, multiple people are required to carefully hold wires together and solder them in place. Vulcan combines the work of four hands into one tool. A team member demonstrated the product by soldering two wires, live onstage. He slid the wires through the tool’s clamping mechanism, similar to a hole-puncher. A small butane torch inside the tool heated the wires in a few seconds, soldering them together. The team estimates Vulcan can be a time-saving advantage for hobbyists, makers, and engineers, potentially selling for around $150.

The Red Team was next with Dextra, a “prosthesis accessory system” designed to simplify everyday tasks for people with below-elbow hook prosthetics. Such prosthetic hooks enable users to lift bags, for example, but other daily tasks such as opening jars can be more difficult. Instead, the team designed a circular connector that fits onto the wrist of a hook prosthetic, along with accessory tools that can slide into the connector to support and assist the user. A prosthetic user, who also happens to be a professional chef, demonstrated the tool onstage in a large kitchen setup. He inserted and used multiple tools to help him slice an onion and open a jar of pickles. The team estimates Dextra can retail at around $750, and aims to expand to prosthetic accessories for the garden, art studio, and other environments.

The Green Team presented Delta Therapy, a system that provides continuous hot and cold therapy for knee surgery recovery patients. Following knee surgeries, patients must alternately apply ice packs and heat pads, which can quickly fade and routinely need replacing. Delta Therapy includes a soft, flexible bandage that contains fluid piping, connected to a compact housing, inside of which is a system that continuously cools or heats the fluid as it flows through. To demo the product, the team invited onstage MIT Undergraduate Association President Danielle Geathers, who underwent knee surgery three years ago. The team wrapped the bandage around Geathers’ knee, taking its temperature before and after the presentation, and found it dropped by 16 degrees in six minutes. They estimate that Delta Therapy, “the coolest way to recover,” could retail for around $5,500.

The Silver Team followed with Aisle Assist, a wheelchair designed to help people into airplane seats. Currently, when a wheelchair user boards a plane, they ride up to the gate, where an attendant helps them into an airplane wheelchair designed to fit through a plane’s narrow aisles. The attendant then must lift the person up and into their assigned seat — an awkward and physically demanding task. Aisle Assist is designed to replace the conventional airplane wheelchair. The team set the stage with rows of airplane seats, and wheeled an able-bodied team member out in Aisle Assist. The new wheelchair has a stabilizing element, and a seat that can slide a person across and into an airplane seat with minimal assistance. At a cost of $7,000, the team hopes the product will give passengers “power to inspire confidence.”

The Pink Team was next with ReVise, a new take on the workbench vise. To show the limitations of a traditional vise, a team member attempted to close a vise, set up onstage, around an uncooked egg, drawing groans from the crowd when it inevitably splattered. ReVise resembles a conventional vise, but with soft, granule-filled pads where a vise’s hard blocks would be. The pads connect to a pneumatic system that sucks air in and out of the pads, adjusting their stiffness to the object they affix. The same team member closed ReVise around another uncooked egg, this time without cracking it. The team envisions selling ReVise to engineering and trade schools, at around $450.

Finally, the Yellow Team presented Palette, a suitcase-sized device, fitted with paint tint cartridges, that automatically mixes tints to a desired shade. The product is meant for housepainters, who can mix specific tints on-site rather than spend time doing so at a hardware store. The team wheeled out two yellow walls, each needing touchups with a color named “Viking Yellow.” One student used a store-mixed can of paint, while another programmed Palette to reproduce the same shade onstage. The system quickly mixed the color, and both members repainted their walls, demonstrating that the colors matched. The system, they estimate, could sell for around $1,800, promising to “color your world faster.”

“To a better world”

As has become a 2.009 tradition, the student presentations ended with a group gift to Wallace. This year, they presented the professor with a set of newly minted nonfungible tokens (NFTs), in the form of past 2.009 Wallace avatars, along with a token for each product designed this year, signed by every student.

In closing the event, Wallace led the audience through a round of tejime, a Japanese custom of hand-clapping and whooping, often performed to conclude a celebration. To his students, he had one message:

“Please see your potential to bring beauty to this Earth. Imagine the stories that you have yet to tell, and dream about the lives you improve through your endeavors. And say hello to a better world.”