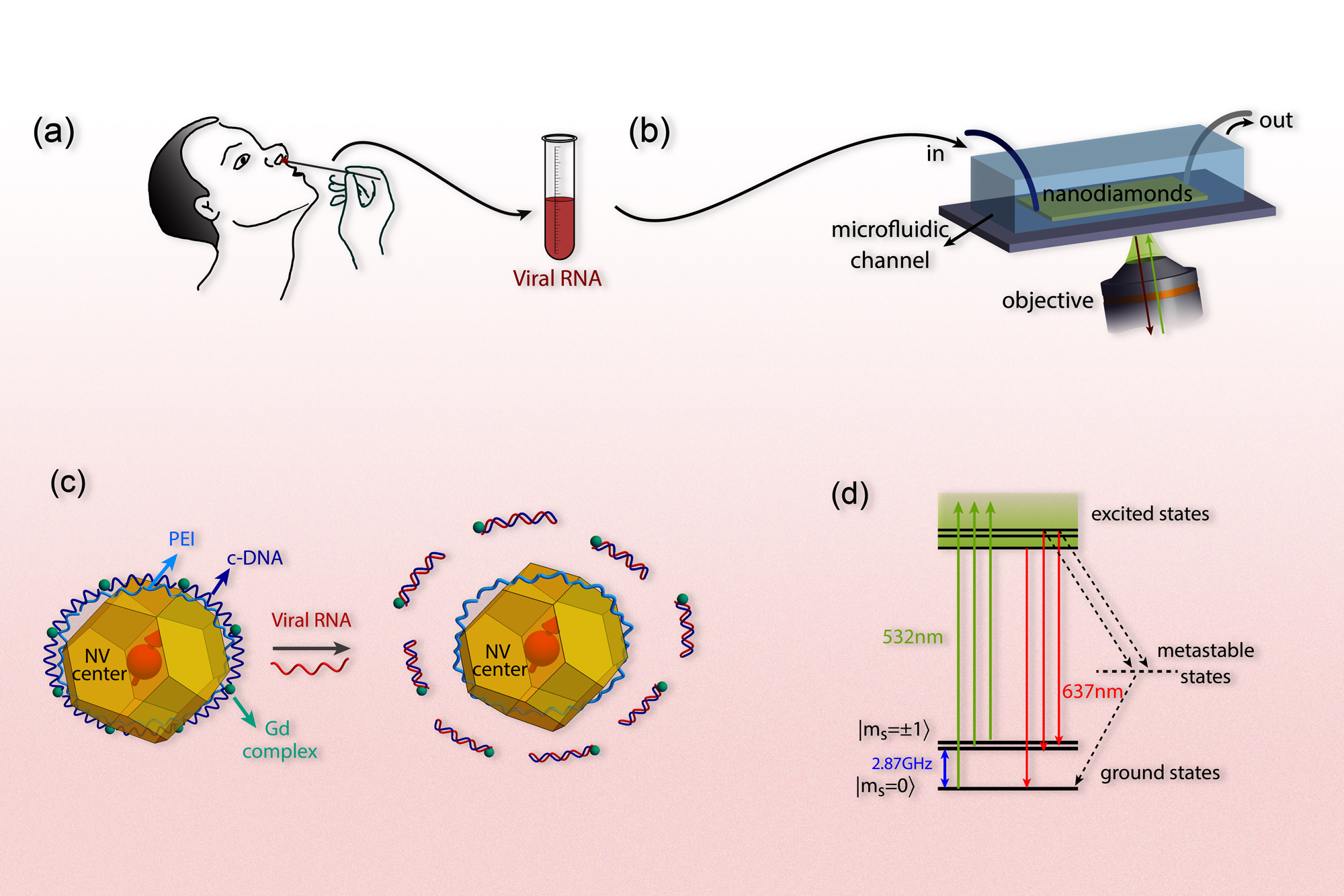 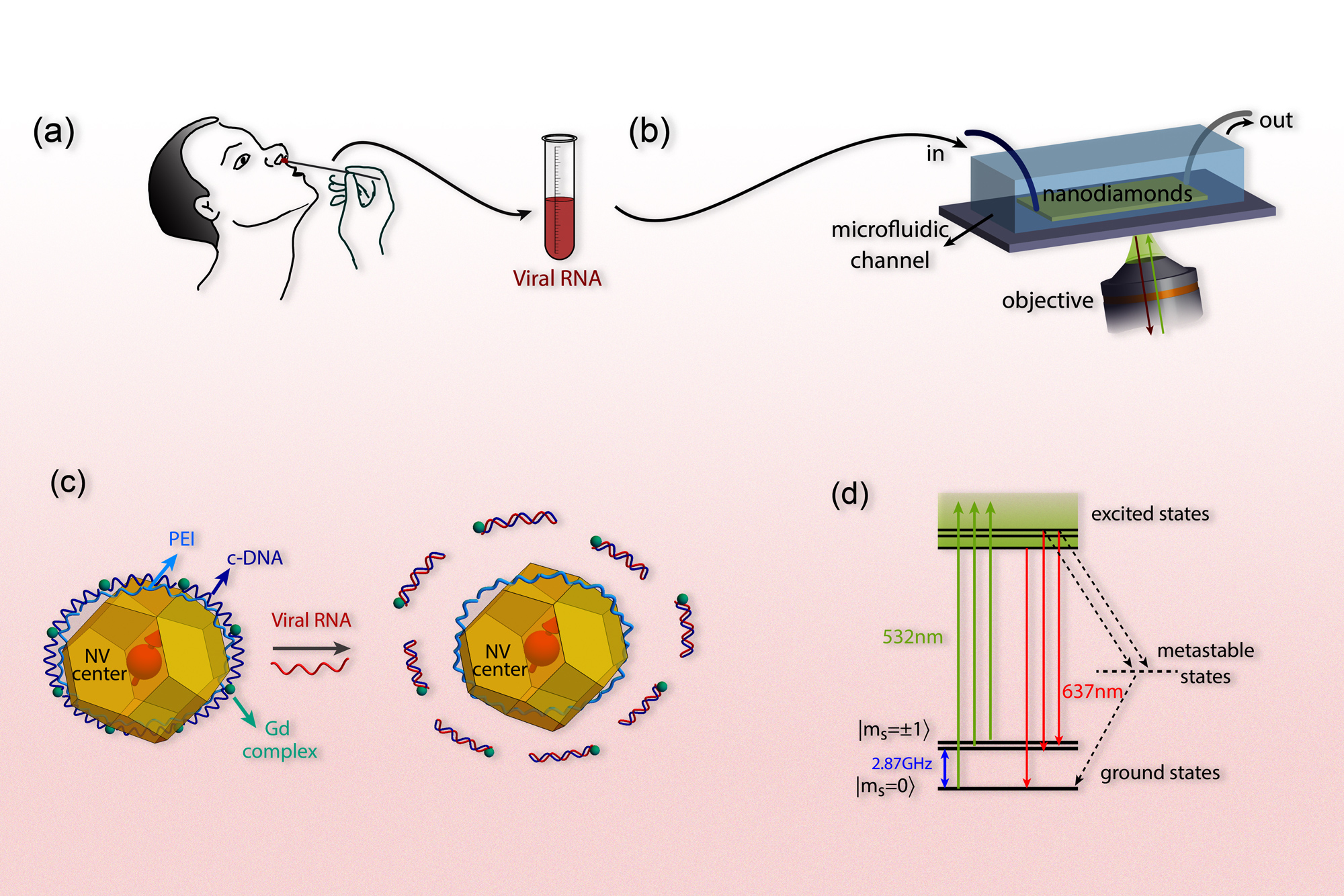 A novel approach to testing for the presence of the virus that causes Covid-19 may lead to tests that are faster, less expensive, and potentially less prone to erroneous results than existing detection methods. Though the work, based on quantum effects, is still theoretical, these detectors could potentially be adapted to detect virtually any virus, the researchers say.

The new approach is described in a paper published Thursday in the journal Nano Letters, by Changhao Li, an MIT doctoral student; Paola Cappellaro, a professor of nuclear science and engineering and of physics; and Rouholla Soleyman and Mohammad Kohandel of the University of Waterloo.

Existing tests for the SARS-CoV-2 virus include rapid tests that detect specific viral proteins, and polymerase chain reaction (PCR) tests that take several hours to process. Neither of these tests can quantify the amount of virus present with high accuracy. Even the gold-standard PCR tests might have false-negative rates of more than 25 percent. In contrast, the team’s analysis shows the new test could have false negative rates below 1 percent. The test could also be sensitive enough to detect just a few hundred strands of the viral RNA, within just a second.

The new approach makes use of atomic-scale defects in tiny bits of diamond, known as nitrogen vacancy (NV) centers. These tiny defects are extremely sensitive to minute perturbations, thanks to quantum effects taking place in the diamond’s crystal lattice, and are being explored for a wide variety of sensing devices that require high sensitivity.

The new method would involve coating the nanodiamonds containing these NV centers with a material that is magnetically coupled to them and has been treated to bond only with the specific RNA sequence of the virus. When the virus RNA is present and bonds to this material, it disrupts the magnetic connection and causes changes in the diamond’s fluorescence that are easily detected with a laser-based optical sensor.

The sensor uses only low-cost materials (the diamonds involved are smaller than specks of dust), and the devices could be scaled up to analyze a whole batch of samples at once, the researchers say. The gadolinium-based coating with its RNA-tuned organic molecules can be produced using common chemical processes and materials, and the lasers used to read out the results are comparable to cheap, widely available commercial green laser pointers.

While this initial work was based on detailed mathematical simulations that proved the system can work in principle, the team is continuing to work on translating that into a working lab-scale device to confirm the predictions. “We don’t know how long it will take to do the final demonstration,” Li says. Their plan is first to do a basic proof-of-principle lab test, and then to work on ways to optimize the system to make it work on real virus diagnosis applications.

The multidisciplinary process requires a combination of expertise in quantum physics and engineering, for producing the detectors themselves, and in chemistry and biology, for developing the molecules that bind with the viral RNA and for finding ways to bond these to the diamond surfaces.

Even if complications arise in translating the theoretical analysis into a working device,  Cappellaro says, there is such a large margin of lower false negatives predicted from this work that it will likely still have a strong advantage over standard PCR tests in that regard. And even if the accuracy were the same, this method would still have a major advantage in producing its results with a matter of minutes, rather than requiring several hours, she says.

The basic method can be adapted to any virus, she says, including any new ones that may arise, simply by adapting the compounds that are attached to the nanodiamond sensors to match the generic material of the specific target virus.

“The proposed approach is appealing both for its generality and its technological simplicity,” says David Glenn, senior research scientist at Quantum Diamond Technologies Inc., who was not associated with this work. “In particular, the sensitive, all-optical detection technique described here requires minimal instrumentation compared to other methods that employ nitrogen vacancy centers,” he says.

He adds that for his company, “we’re very excited about using diamond-based quantum sensors to build powerful tools for biomedical diagnostics. Needless to say, we will be following along with great interest as the ideas presented in this work are translated to the lab.”

The work was supported by the U.S. Army Research Office and the Canada First Research Excellence Fund.