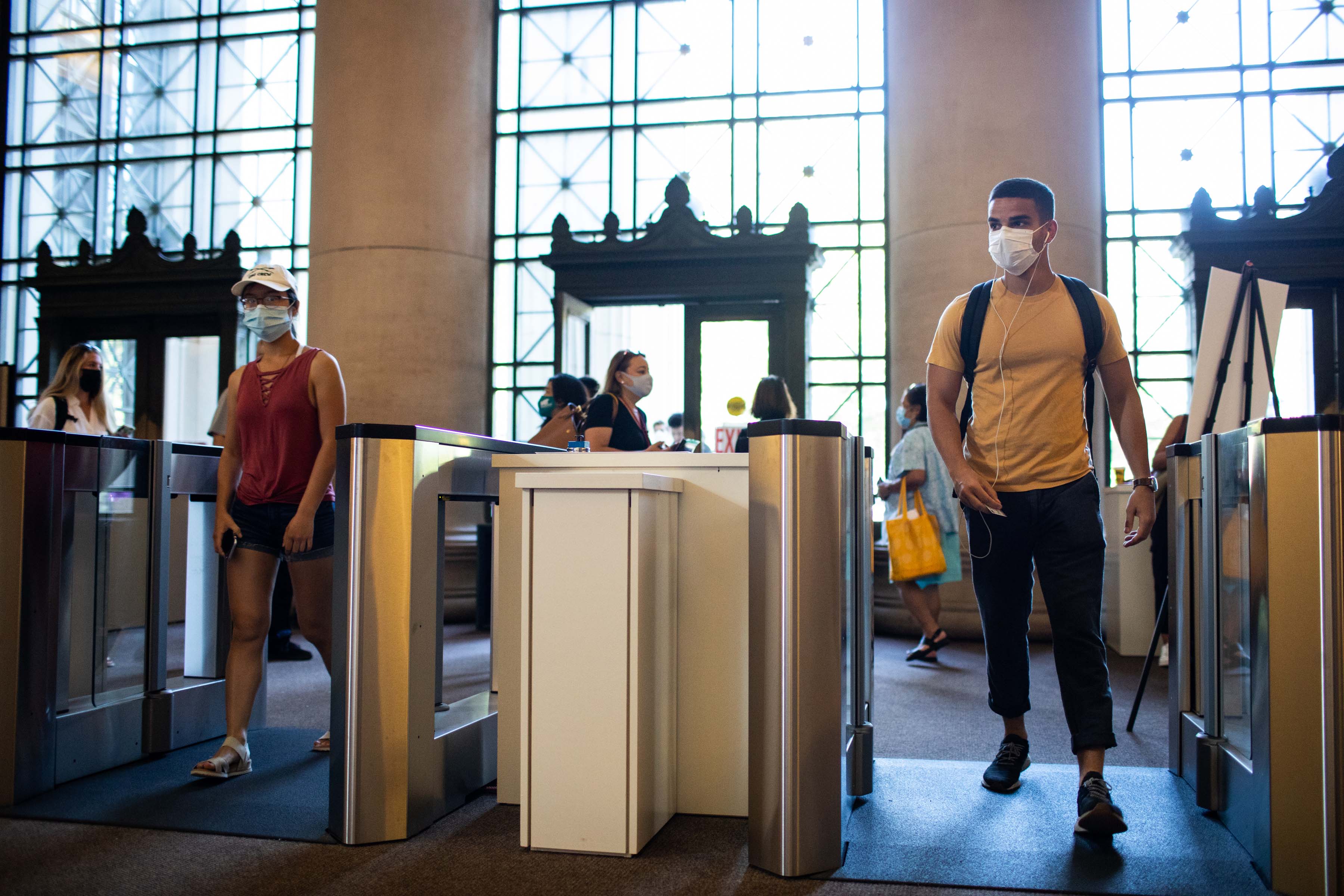 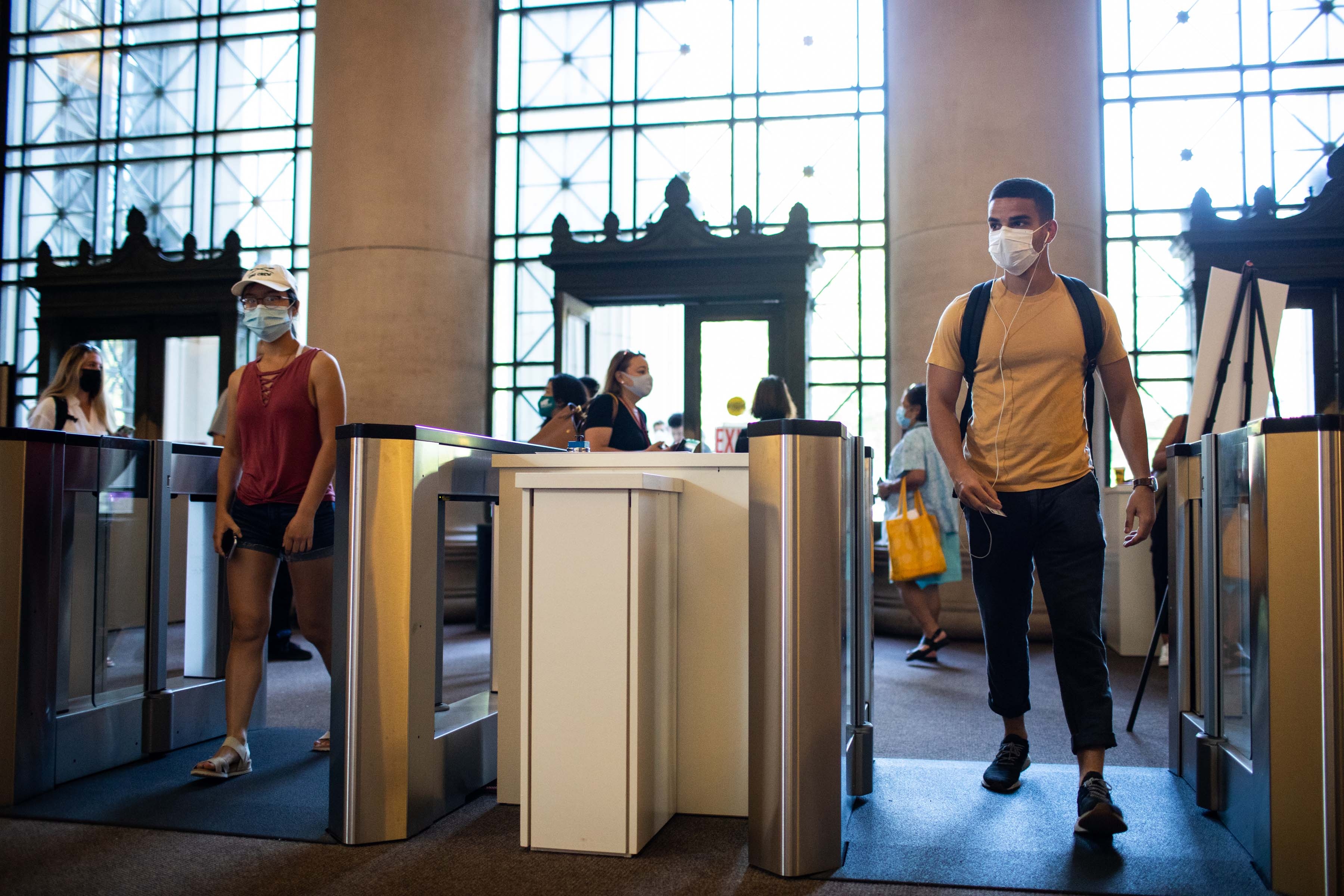 During 2021, the Covid-19 pandemic continued to color much of the year, as MIT saw both the promise of vaccines as well as the rise of troubling new variants. The Institute also made new commitments to climate action, saw the opening of new and renovated spaces, continued in its efforts to support its diverse voices, and celebrated new Nobel laureates and astronaut candidates. Here are some of the top stories in the MIT community this year.

Continuing to work through Covid

Vaccines became widely available to the MIT community early in the year — thanks, in significant part, to the ingenuity of MIT scientists and engineers. In response, the Institute developed a policy requiring vaccination for most members of the community and planned a return to fully in-person teaching and working at MIT for the fall 2021 semester.

With copious protections in place, the fall semester in many ways embodied MIT’s resilience: In-person teaching expanded, staff returned with new flexible arrangements, and community spirit lifted as face-to-face meetings became possible in many cases once again. Some annual traditions, such as Commencement, stayed remote, while others, like the outdoor Great Glass Pumpkin Patch, and 2.009 grand finale, returned, adding smiles and a sense of gratitude among community members.

In August, Melissa Nobles, the former Kenin Sahin Dean of the MIT School of Humanities, Arts, and Social Sciences, became the Institute’s new chancellor. A political scientist, Nobles succeeded Cynthia Barnhart, who returned to research and teaching after seven years as chancellor.

In other news related to MIT’s top administration, Martin Schmidt announced in November that after 40 years at MIT, he plans to step down as provost to become the next president of Rensselaer Polytechnic Institute, his alma mater.

MIT unveiled a new action plan to tackle the climate crisis, committing to net-zero emissions by 2026 and charting a course marshaling all of MIT’s capabilities toward decarbonization. The plan includes a broad array of new initiatives and significant expansions of existing programs to address the needs for new technologies, new policies, and new kinds of outreach to bring the Institute’s expertise to bear on this critical global issue.

In November, a delegation from MIT also traveled to Scotland for COP26, the 2021 United Nations climate change conference, where international negotiators sought to keep global climate goals on track. Approximately 20 MIT faculty, staff, and students were on hand to observe the negotiations, share and conduct research, and launch new initiatives.

MIT and Harvard University announced in June that assets of edX, the nonprofit they launched in 2012 to provide an open online platform for university courses, would be acquired by the publicly-traded education technology company 2U, and reorganized as a public benefit company under the 2U umbrella. In exchange, 2U was set to transfer net proceeds from the $800 million transaction to a nonprofit organization, also led by MIT and Harvard, to explore the next generation of online education.

As an important step forward in MIT’s ongoing efforts to create a more welcoming and inclusive community, the Institute hired six new assistant deans, one in each school and in the MIT Schwarzman College of Computing, to serve as diversity, equity, and inclusion professionals. In addition, this week Institute Community and Equity Officer John Dozier provided an update on the Strategic Action Plan for Diversity, Equity, and Inclusion, the first draft of which was released in March.

A community discussion also examined the complexities of Asian American and Pacific Islander identity and acceptance at MIT, while underscoring the need for collaborative work among groups to combat prejudice and create equity. The forum was held amid a string of violent assaults on Asian Americans in the U.S., which raised public awareness about anti-Asian discrimination. Meanwhile, Professor Emma Teng provided historic context for the crisis.

Professor Joshua Angrist, whose influential work has enhanced rigorous empirical research in economics, shared half of the 2021 Nobel Prize in economic sciences with Guido Imbens of the Stanford Graduate School of Business; the other half went to David Card of the University of California at Berkeley.

In addition, David Julius ’77, a professor at the University of California at San Francisco, shared the 2021 Nobel Prize in Physiology or Medicine with Ardem Patapoutian, a professor at the Scripps Research Institute, for their discoveries in how the body senses touch and temperature. And Maria Ressa, a journalist in the Philippines and digital fellow at the MIT Initiative on the Digital Economy, shared the 2021 Nobel Peace Prize with journalist Dmitry Muratov of Russia.

Before taking office in January, President Joe Biden selected two MIT faculty leaders for top science and technology posts in his administration. Eric Lander, director of the Broad Institute and professor of biology, was named presidential science advisor and director of the Office of Science and Technology Policy. Maria Zuber, vice president for research and professor of earth, atmospheric, and planetary sciences, was named co-chair of the President’s Council of Advisors on Science and Technology (PCAST), along with Caltech chemical engineer Frances Arnold — the first women ever to co-chair PCAST.

Paula Hammond, head of the Department of Chemical Engineering, was also chosen to serve as a member of PCAST. Earlier in the year, Hammond, along with chemical engineer Arup Chakraborty, was named an Institute Professor, the highest honor bestowed upon MIT faculty.

MIT’s Task Force 2021 and Beyond, charged with reimagining the future of MIT, released its final report, 18 months after it began work in the shadow of the Covid-19 pandemic. The report offers 17 recommendations to strengthen and streamline MIT, and make the Institute more successful across its teaching, research, and innovation endeavors. In addition to a providing a substantive list of recommendations, the report suggests routes to implementation, and assigns one or more senior leaders or faculty governance committees with oversight, for every idea presented.

A number of facilities, new or newly redesigned, opened in 2021. These included a new MIT Welcome Center in Kendall Square; the new InnovationHQ, a hub for MIT entrepreneurship; the newly renovated and reimagined Hayden Library and courtyard; and the new MIT Press Bookstore. Two new student residences also opened, and the community welcomed programming from the Institute’s new outdoor open space.

In Case You Missed It…

Additional top community stories of 2021 included NASA’s selection of three new alumni astronaut candidates; the announcement of the 2021 MIT Solve Global Challenges; the successful conclusion of the MIT Campaign for a Better World; a win for MIT in the American Solar Challenge; a look at chess at the Institute; a roundup of new books from MIT authors; and the introduction of STEM-focused young-adult graphic fiction from the MIT Press.