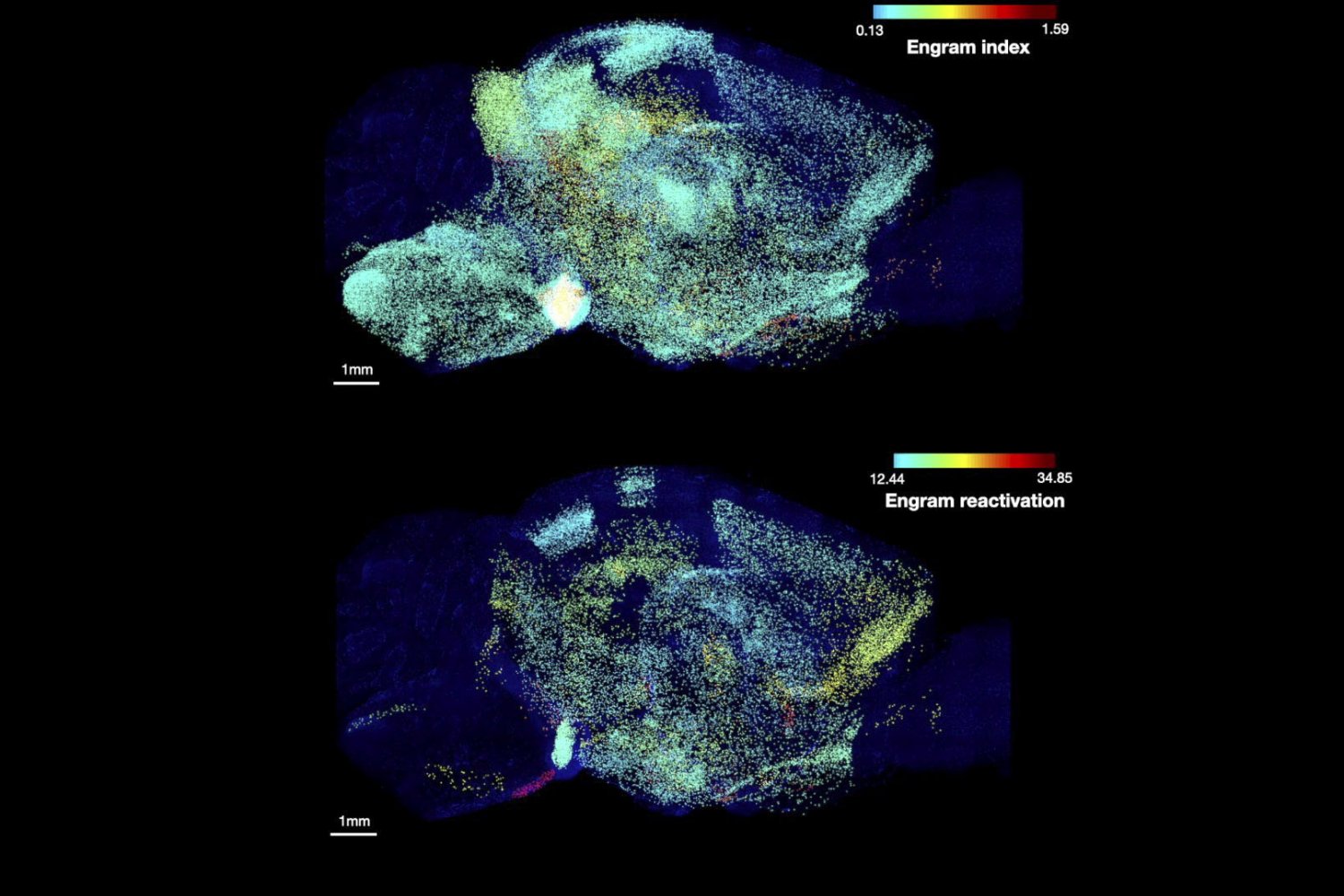 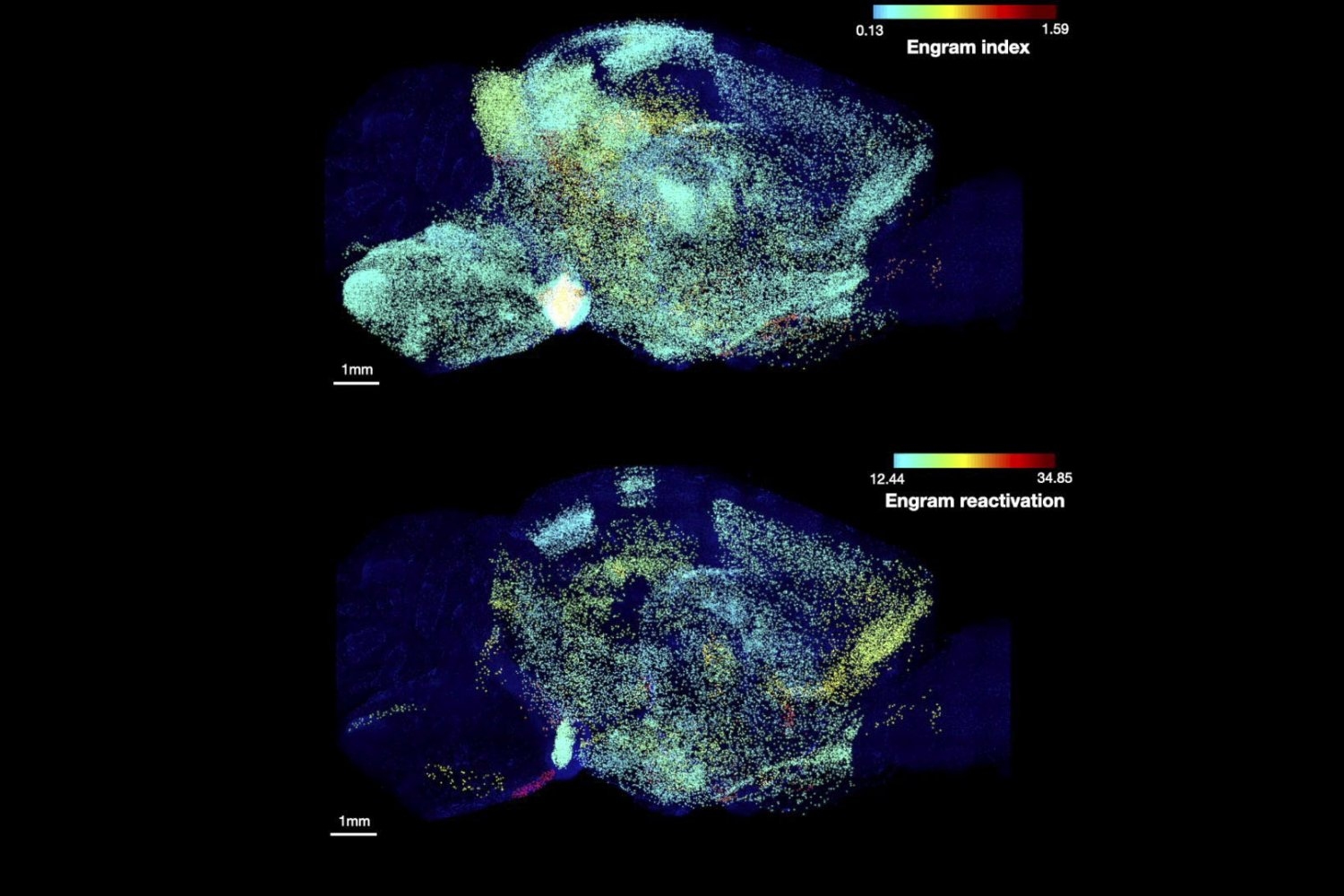 A new study by scientists at The Picower Institute for Learning and Memory at MIT provides the most comprehensive and rigorous evidence yet that the mammalian brain stores a single memory across a widely distributed, functionally connected complex spanning many brain regions, rather than in just one or even a few places.

Memory pioneer Richard Semon had predicted such a “unified engram complex” more than a century ago, but achieving the new study’s affirmation of his hypothesis required the application of several technologies developed only recently. In the study, the team identified and ranked dozens of areas that were not previously known to be involved in memory and showed that memory recall becomes more behaviorally powerful when multiple memory-storing regions are reactivated, rather than just one.

“When talking about memory storage we all usually talk about the hippocampus or the cortex,” says co-lead and co-corresponding author Dheeraj Roy. He began the research while a graduate student in the RIKEN-MIT Laboratory for Neural Circuit Genetics at the Picower Institute led by senior author and Picower Professor Susumu Tonegawa. “This study reflects the most comprehensive description of memory encoding cells, or memory ‘engrams,’ distributed across the brain, not just in the well-known memory regions. It basically provides the first rank-ordered list for high-probability engram regions. This list should lead to many future studies, which we are excited about, both in our labs and by other groups.”

In addition to Roy, who is now a McGovern Fellow in the Broad Institute of MIT and Harvard and the lab of MIT neuroscience Professor Guoping Feng, the study’s other lead authors are Young-Gyun Park, Minyoung Kim, Ying Zhang, and Sachie Ogawa.

The team was able to map regions participating in an engram complex by conducting an unbiased analysis of more than 247 brain regions in mice that were taken from their comfortable home enclosure to a novel enclosure where they felt a small but memorable electrical zap. In one group of mice, neurons were engineered to become fluorescent when they expressed a gene required for memory encoding. In another group, cells activated by naturally recalling the unpleasant memory (e.g., when the mice returned to the scene of the zap) were fluorescently labeled instead. Cells that were activated by memory encoding or by recall could therefore readily be seen under a microscope after the brains were preserved and optically cleared using a technology called SHIELD, developed by co-corresponding author Kwanghun Chung, associate professor in the Picower Institute, the Institute for Medical Engineering and Science, and the Department of Chemical Engineering. By using a computer to count fluorescing cells in each sample, the team produced brain-wide maps of regions with apparently significant memory encoding or recall activity.

The maps highlighted many regions expected to participate in memory, but also many that were not. To help factor out regions that might have been activated by activity unrelated to the unpleasant memory, the team compared what they saw in unpleasant-memory-encoding or unpleasant-memory-recalling mice to what they saw in the brains of controls that were simply left in their home enclosure. This allowed them to calculate an “engram index” to rank order 117 brain regions with a significant likelihood of being involved in the memory engram complex. They deepened the analysis by engineering new mice in which neurons involved in both memory encoding and in recall could be doubly labeled, thereby revealing which cells exhibited overlap of those activities.

To really be an engram cell, the authors noted, a neuron should be activated both in encoding and recall.

“These experiments not only revealed significant engram reactivation in known hippocampal and amygdala regions, but also showed reactivation in many thalamic, cortical, midbrain, and brainstem structures,” the authors wrote. “Importantly when we compared the brain regions identified by the engram index analysis with these reactivated regions, we observed that ~60 percent of the regions were consistent between analyses.”

Researchers tracked neural activity brainwide in mice exposed to a conditioned memory stimulus and those left unstimulated in their home enclosure as controls.

Having ranked regions significantly likely to be involved in the engram complex, the team engaged in several manipulations to directly test their predictions and to determine how engram complex regions might work together.

For instance, they engineered mice such that cells activated by memory encoding would also become controllable with flashes of light (a technique called “optogenetics”). The researchers then applied light flashes to select brain regions from their engram index list to see if activating those would artificially reproduce the fear memory behavior of freezing in place, even when mice were placed in a “neutral” enclosure where the zap had not occurred.

“Strikingly, all these brain regions induced robust memory recall when they were optogenetically stimulated,” the researchers observed. Moreover, stimulating areas that their analysis suggested were insignificant to unpleasant memory indeed produced no freezing behavior.

The team then demonstrated how different regions within an engram complex connect. They chose two well-known memory regions, CA1 of the hippocampus and the basolateral amygdala (BLA), and optogenetically activated engram cells there to induce memory recall behavior in a neutral enclosure. They found that stimulating those regions produced memory recall activity in specific “downstream” areas identified as being probable members of the engram complex. Meanwhile, optogenetically inhibiting natural unpleasant memory recall in CA1 or the BLA (i.e., when mice were placed back in the enclosure where they experienced the zap) led to reduced activity in downstream engram complex areas compared to what they measured in mice with unhindered natural recall.

Further experiments showed that optogenetic reactivations of engram complex neurons followed similar patterns as those observed in natural memory recall. So having established that natural memory encoding and recall appears to occur across a wide engram complex, the team decided to test whether reactivating multiple regions would improve memory recall compared to reactivating just one. After all, prior experiments have shown that activating just one engram area does not produce recall as vividly as natural recall. This time the team used a chemical means to stimulate different engram complex regions and when they did, they found that indeed stimulating up to three involved regions simultaneously produced more robust freezing behavior than stimulating just one or two.

Roy says that by storing a single memory across such a widespread complex the brain might be making memory more efficient and resilient.

“Different memory engrams may allow us to recreate memories more efficiently when we are trying to remember a previous event (and similarly for the initial encoding where different engrams may contribute different information from the original experience),” he says. “Secondly, in disease states, if a few regions are impaired, distributed memories would allow us to remember previous events and in some ways be more robust against regional damages.”

In the long term, that second idea might suggest a clinical strategy for dealing with memory impairment: “If some memory impairments are because of hippocampal or cortical dysfunction, could we target understudied engram cells in other regions, and could such a manipulation restore some memory functions?”

That’s just one of many new questions researchers can ask now that the study has revealed a listing of where to look for at least one kind of memory in the mammalian brain.