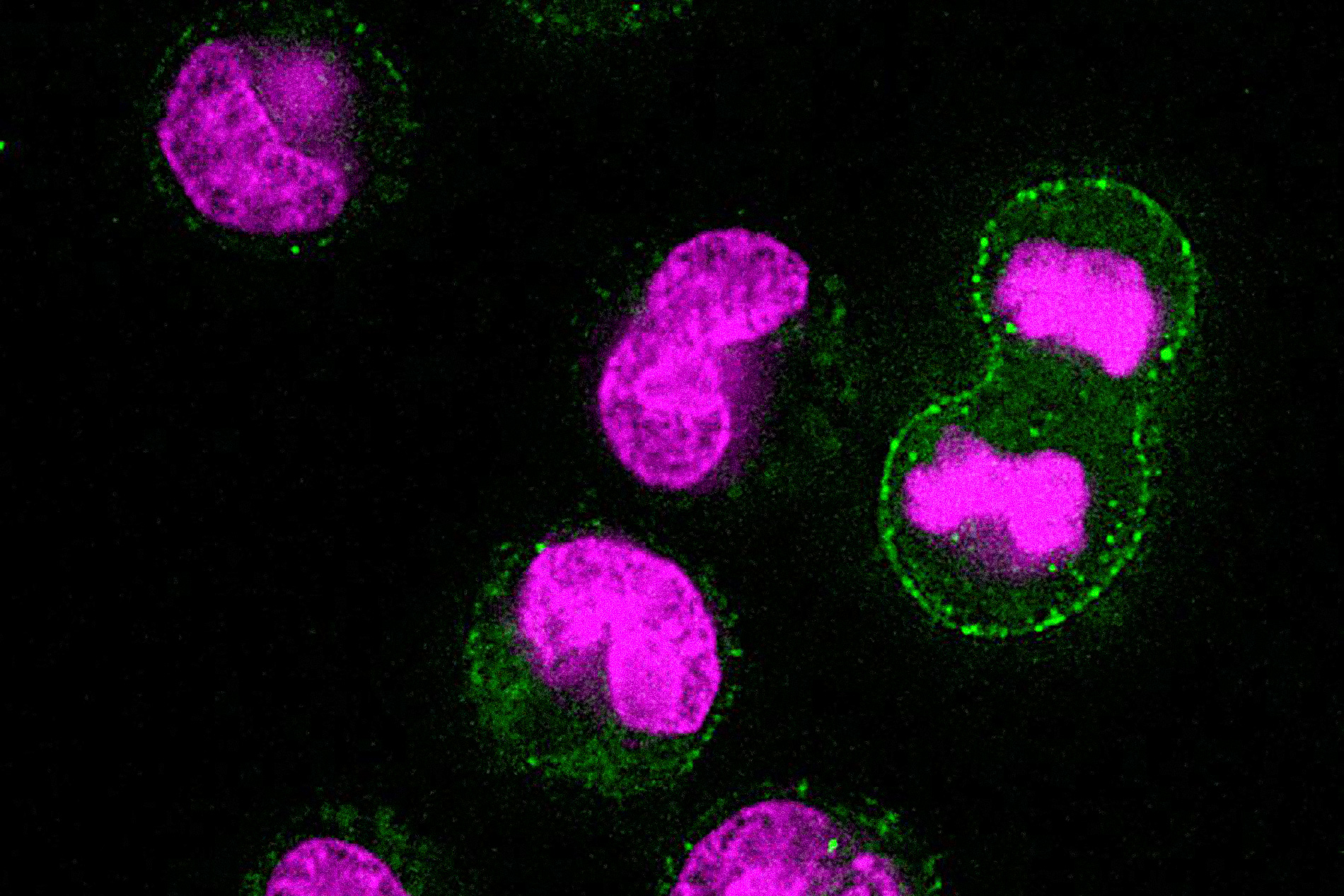 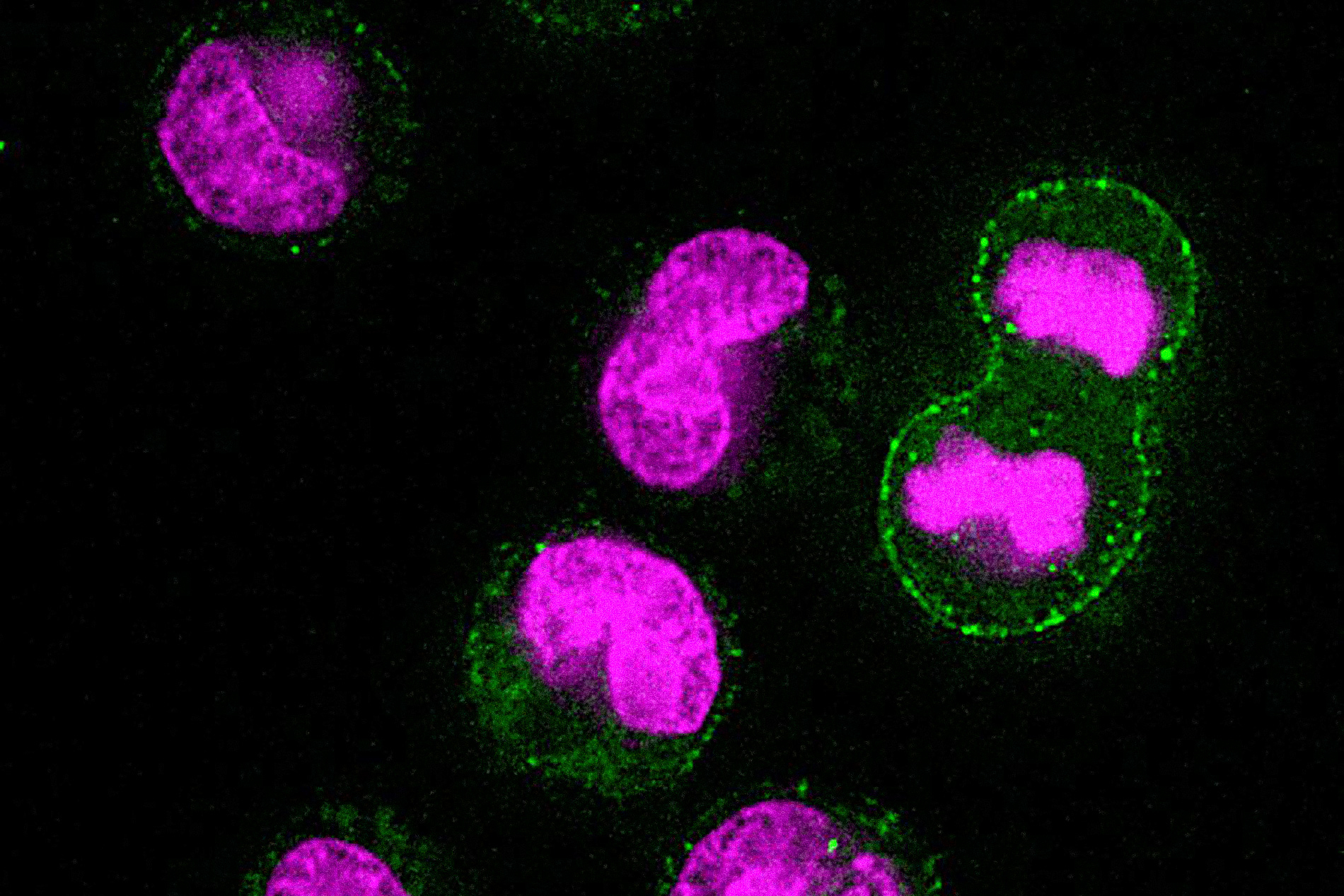 MIT researchers have discovered that before cells start to divide, they do a little cleanup, tossing out molecules that they appear not to need anymore.

Using a new method they developed for measuring the dry mass of cells, the researchers found that cells lose about 4 percent of their mass as they enter cell division. The researchers believe that this emptying of trash helps cells to give their offspring a “fresh start,” without the accumulated junk of the parent cell.

“Our hypothesis is that cells might be throwing out things that are building up, toxic components or just things that don’t function properly that you don’t want to have there. It could allow the newborn cells to be born with more functional contents,” says Teemu Miettinen, an MIT research scientist and the lead author of the new study.

Scott Manalis, the David H. Koch Professor of Engineering in the departments of Biological Engineering and Mechanical Engineering, and a member of the Koch Institute for Integrative Cancer Research, is the senior author of the paper, which appears today in eLife. MIT biological engineering undergraduates Kevin Ly and Alice Lam are also authors of the paper.

Measuring the dry mass of a cell — the weight of its contents not including the water — is commonly done using a microscopy technique called quantitative phase microscopy. This technique can measure cell growth, but it does not reveal information about the molecular content of the dry mass and it is difficult to use with cells that grow in suspension.

Manalis’ lab has previously developed a technique for measuring the buoyant mass of cells, which is their mass as they float in a fluid such as water. This method measures buoyant mass by flowing cells through a channel embedded in a vibrating cantilever, which can be done repeatedly to track changes in a particular cell’s mass over many hours or days.

For their new study, the researchers wanted to adapt the technique so that it could be used to calculate the dry mass of cells, as well as the density of the dry mass. About 10 years ago, they had discovered that they could calculate a cell’s dry mass if they first measured the cell in normal water and then in heavy water (which contains deuterium instead of ordinary hydrogen). These two measurements can be used to calculate the cell’s dry mass.

However, heavy water is toxic to cells, so they were only able to obtain a single measurement per cell. Last year, Miettinen set out to see if he could design a system in which cells could be measured repeatedly with minimal exposure to heavy water.

In the system he came up with, cells are exposed to heavy water very briefly as they flow through microfluidic channels. It takes only one second for a cell to completely exchange its water content, so the researchers could measure the cell’s mass when it was full of heavy water, compare it to the mass in normal water, and then calculate the dry mass.

“Our idea was that if we minimize the cells’ exposure to the heavy water, we could engineer the system so that we could repeat this measurement over extended time periods without hurting the cell,” Miettinen says. “That enabled us for the first time to track not just the dry mass of a cell, which is what others do using microscopic methods, but also the density of the dry mass, which informs us of the cell’s biomolecular composition.”

The researchers showed that their dry mass measurements qualitatively agreed with previous work using quantitative phase microscopy. And, in addition to providing density of the dry mass, the MIT team’s method enables higher temporal resolution, which proved to be useful for revealing dynamics during mitosis (cell division).

Taking out the trash

In cells undergoing mitosis, the researchers used their new technique to study what happens to cell mass and composition during that process. In a 2019 paper, Miettinen and Manalis found that buoyant mass increases slightly as mitosis begins. However, other studies that used quantitative phase microscopy suggested that cells might retain or lose dry mass early in cell division.

In the new study, the MIT team measured three types of cancer cells, which are easier to study because they divide more frequently than healthy cells. To their surprise, the researchers found that the dry mass of cells actually decreases when they enter the cell division cycle. This mass is regained later on, before division is complete.

Further experiments revealed that as cells enter mitosis, they ramp up activity of a process called lysosomal exocytosis. Lysosomes are cell organelles that break down or recycle cellular waste products, and exocytosis is the process they use to jettison any molecules that aren’t needed any more.

The researchers also found that the density of the dry mass increases as the cells lose dry mass, leading them to believe that the cells are losing low-density molecules such as lipids or lipoproteins. They hypothesize that cells use this process to clear out toxic molecules before dividing. “What we are seeing is that cells might be trying to throw out damaged components before dividing,” Miettinen says.

The researchers speculate that their findings may help explain why neurons, which do not divide, are more likely to accumulate toxic proteins such as Tau or amyloid beta, which are linked to the development of Alzheimer’s disease.

The findings could also be relevant to cancer: Cancer cells can expel some chemotherapy drugs using exocytosis, helping them to become resistant to the drugs. In theory, preventing exocytosis from occurring before cell division could help to make cancer cells more susceptible to such drugs.

“There are diseases where we might want upregulate exocytosis, for example in neurodegenerative diseases, but then there are diseases like cancer where maybe we want to dial it down,” Miettinen says. “In the future, if we could better understand the molecular mechanism behind this, and find a way to trigger it outside of mitosis or prevent it during mitosis, we could really have a new toggle to use when treating disease.”

The research was funded by the MIT Center for Cancer Precision Medicine, the Virginia and D.K. Ludwig Fund for Cancer Research, the Cancer Systems Biology Consortium, and the Koch Institute Support (core) Grant from the National Cancer Institute.